Regardless of the reason, we have firsthand knowledge of Facebook not giving a damn about people creating profiles which are clearly for – and only for – offering sex. Nevermind that the person behind the profile is probably some sweaty scammer in a far-off country reeling unsuspecting people in while online from a cybercafe.


Earlier this month, this profile sent us a friend request:

And rather than accepting ‘her’ friend request, we dutifully reported the profile to Facebook.

And, to our surprise (but only slightly) we got back this response from Facebook:

“Thanks for your report – you did the right thing by letting us know about this. We looked over the profile you reported, and though it doesn’t go against one of our specific Community Standards, we understand that the profile or something they shared may still be offensive to you. We want to help you avoid things you don’t want to see on Facebook.

If you think we should look at something specific on this or another profile, you can report that exact content (ex: photo) instead of the entire profile.

From the list above, you also can block Alyana Ariana directly, or you may be able to unfriend or unfollow them. We recommend visiting the Help Center to learn more about how to control what you see in your News Feed. If you find that a person, group or Page consistently posts things you don’t want to see, you may want to limit how often you see their posts or remove them from your Facebook experience.

We know these options may not apply to every situation, so please let us know if you see something else you think we should take a look at.” 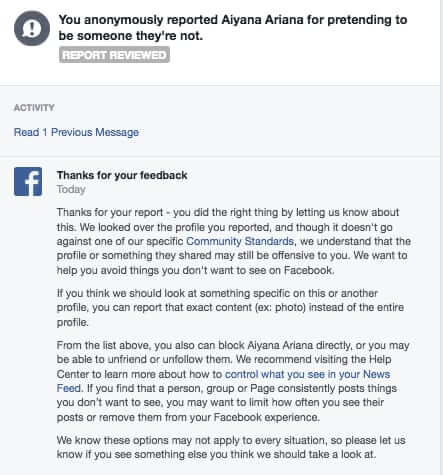 Now, we could understand if it was an autoresponse. But the response makes a point of saying “We looked over the profile you reported, and though it doesn’t go against one of our specific Community Standards…”.

Which led us to wonder: just what exactly are those community standards?

In brief, here’s what they are:

(Source: What types of things aren’t allowed on Facebook?)

So, about that Adult Nudity and Sexual Activity Facebook community standards section, here’s what it says:

We restrict the display of nudity or sexual activity because some people in our community may be sensitive to this type of content. Additionally, we default to removing sexual imagery to prevent the sharing of non-consensual or underage content. Restrictions on the display of sexual activity also apply to digitally created content unless it is posted for educational, humorous, or satirical purposes.

Our nudity policies have become more nuanced over time. We understand that nudity can be shared for a variety of reasons, including as a form of protest, to raise awareness about a cause, or for educational or medical reasons. Where such intent is clear, we make allowances for the content. For example, while we restrict some images of female breasts that include the nipple, we allow other images, including those depicting acts of protest, women actively engaged in breast-feeding, and photos of post-mastectomy scarring. We also allow photographs of paintings, sculptures, and other art that depicts nude figures.

The page goes on to say:

So, what do you think? Did the page we reported violate those community standards?

Facebook Paper - Facebook Reinvents the Facebook App Again
Facebook "Saved" Section for Saving Links, Videos, Events, Music, Movies and More
You Can be Easily Stalked through Facebook Messenger Even if You Don't Have Messenger Yourself!
Google, Microsoft, Yahoo and Facebook Fight Back to Thwart NSA
How to Keep Up with All of Those Facebook Birthday Messages
5 Rising Social Media Platforms to Watch-If You Are Business Minded
Cop Selfies and Duck of Justice Feature on Bangor Maine PD Facebook Page
Facebook is Analyzing All of Your Images and Taking Note of the Contents
31shares 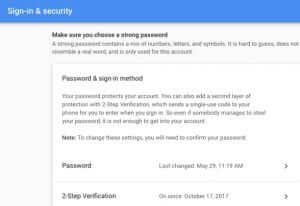 Can’t Download Gmail after an OS Update or Upgrade? This May be the Problem

How to Change or Get Rid of the Quote Attribution Line in the Mac’s Mail.app Mail Program – Updated for OS X 10.8 Mountain Lion Too!
WP RSS Plugin on WordPress
31shares