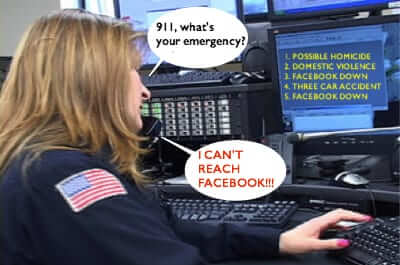 Residents in California called 911 when Facebook was down for more than an hour. What has this society come to when people need to be told that not being able to get on Facebook is not a 911 emergency?

According to emergency medical services website EMS1, no fewer than five residents from the East Bay alone called harried dispatchers, wondering when Facebook would be back up.

According to one dispatcher, a distraught woman even called back to tell the dispatcher that she was being rude to have told the woman that Facebook going down is not a life-and-death emergency.

Said the dispatcher, writing in to the California Bay Area news site, Claycord.com, “I just want to know if you can put a note out to Claycordians asking them to not call 911 when a website doesn’t work?”

“We have nothing to do with Facebook and when Facebook isn’t working,” the dispatcher goes on to say, “it’s not an emergency. Our lines are dedicated to handle life and death calls, and even though Facebook is important to a lot of people, it’s not a matter of life and death when it stops working. One caller even called back to tell me I was being rude because I told her it wasn’t a life threatening emergency.”

This all occurred when Facebook went unavailable for about an hour last week, for much of the world, not just the U.S. – and yet, to date we have seen no reports of emergency dispatchers in other countries getting calls because the person couldn’t reach Facebook. We wonder if this is a primarily American over-attachment to Facebook, and either way, what these actions say about our society in 2015.

The Spinning Disks of Internet Slowdown Day Explained
Pizza Rat an Internet Sensation
NIFOC, BOGSAT, and 1000s More in FBI Glossary of Internet Slang Acronyms
Papyrus and American Greeting Cards Stores Put Out of Business by eCards
Do You have a Finstagram (Fake Instagram) Account?
How to Find Birthdays in the Facebook Mobile App
Do You Have Protection Fatigue Brought on by Trying to Keep Yourself Safe from the Virus?
How to Remove a Shop from Your Facebook Page (with Screenshots)
Share the knowledge

2 thoughts on “Police to Residents: Facebook Going Down is NOT a 911 Emergency!”

Number of people who have enjoyed this article: 1,998