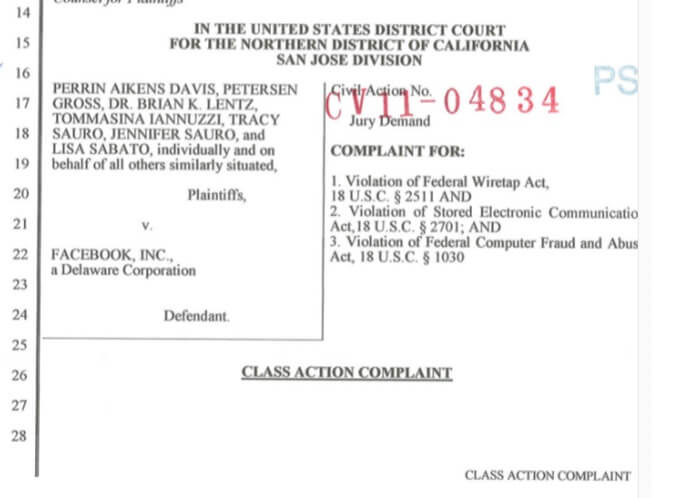 If you received an email saying ‘Notice of Proposed Settlement of Class Action’ for a Facebook lawsuit settlement, it’s legit. There is a settlement in the Facebook lawsuit class action over the Internet tracking of Facebook users, and the settlement payout date will be some time after September 22, 2022. That is because September 22 is the date by which you must submit your claim as part of the ‘class’ and receive your payout. Nobody knows how much the payout will be, and in part that is because it depends on how many people submit claims; the settlement itself is $90million. Of course, the attorneys will receive about a third of that, leaving a pool of about $60million to be divided between everyone who submits a claim (that’s generally how class action settlements work).

The procedural history of this case is long, and convoluted. The plaintiffs, Perrin Davis and several others, first filed their lawsuit in 2012, asserting that Facebook had violated, among other things, the Federal Wiretap Act, the Federal Stored Electronic Communications Act, and the Federal Computer Fraud and Abuse Act.

Through a series of legal maneuvers, however, Facebook was able to file motions to dismiss, and have them granted, the court dismissing the case in 2015 (slow grind the wheels of justice). (The motions to dismiss were granted for lack of standing, failure to state a claim, etc., for you legal buffs.)

The plaintiffs amended and re-filed their claims at the end of 2015, Facebook filed more motions to dismiss, and the court again rejected the plaintiffs’ claims and dismissed the case in Facebook’s favor. However this time the plaintiffs appealed the court’s dismissal, appealing it to the appeals court above the court which had dismissed the case. That appeals court was the 9th Circuit Court of Appeals. The 9th Circuit held that the lower court was wrong to dismiss the case, and reinstated it. (For a really great in-depth explanation of the legal wranglings check out EPIC’s explanation here.) At that point, Facebook appealed the 9th Circuit’s reinstatement of the case, appealing it to the Supreme Court of the United States.

In this case the Supreme Court denied Facebook’s application for a Writ of Cert, which meant that the lower court’s reinstatement of the case stood. So Facebook had a choice as to whether to actually litigate the case on the merits, or settle. They chose to settle.

Which brings us to now. If you received that email saying ‘Notice of Proposed Settlement of Class Action’, it means that the administrators in the ‘Facebook Internet Tracking Litigation’ case have identified you as a likely member of the class; in other words it’s likely that you had a Facebook account during the period between April 22, 2010 and September 26, 2011, and that you visited a non-Facebook website which had a ‘Like’ button. They probably know this because, hey, the entire case was about how Facebook tracked you then, so in that way their own data was their own petard upon which they were hoisted.

The website at which to register as a confirmed member of the class is https://www.fbinternettrackingsettlement.com/, however you need both the ‘Notice ID’ and the ‘Confirmation Code’ from the email in order to register and submit your claim. You can join the class without those, if you are someone with a freakishly good memory who remembers that, more than 10 years ago, you visited a website and saw a Facebook ‘Like’ button while you also had an account on Facebook.

Either way, if you get the notice or otherwise believe that you qualify, you have basically 4 options:

Submit a claim by September 22, 2022 (that is the only way to receive a settlement payment)

Proactively opt out of and exclude yourself from the class (you would do this if, for example, you plan to sue Facebook on your own for this issue instead).

Object to the settlement, like if you think it could have been better.

Do nothing. If you do nothing, you basically consent to being part of the class but you don’t get paid a settlement. In fact, the administration site specifically says that unless you intentionally and proactively exclude yourself from the class “you are automatically part of the Settlement. If you do nothing, you will not get a payment from this Settlement and you will give up the right to sue, continue to sue, or be part of another lawsuit against the Defendant related to the legal claims resolved by this Settlement.”

Happily, it turns out to be really easy to submit your claim. You just go to the website, enter the Notice ID and Confirmation Code, confirm your name and address, and select a payment method (they offer check, Paypal, Venmo(!), and direct deposit).

Is The Internet Changing Our Brains?
NASCAR Admits It Abused The DMCA To Get YouTube To Remove Wreck Footage Posted By Tyler Anderson
Full Explanation of Court Order to Apple to Unlock San Bernardino Shooters' iPhone and Apple Refusal...
You May Be Missing Private Messages on Facebook If You Aren't Looking in These Two Places
Burgler Uses Victim's Computer While in Home: You Won't Believe What He Did Next!
How to Turn Off App and Game Invitations on Facebook and Stop Facebook from Sharing Your Info
All About the California Consumer Privacy Act of 2018 - California's Own Version of GDPR: An Overvie...
How Private are Facebook Private Closed Groups Really? Not Very it Turns Out
Share the knowledge

5 thoughts on “The Facebook Lawsuit Settlement and Payout Date (2022)”

Number of people who have enjoyed this article: 1,200