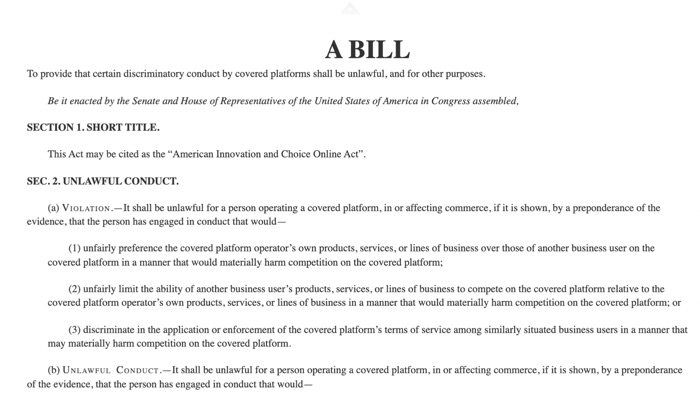 If you recently received email from Google urging you to “understand how new legislation could harm your business”, yet with no information about WHAT legislation they’re talking about, well, that’s because they are hiding the ball on that, apparently intentionally (after all, does Google ever do anything unintentionally?)

First, here’s the text of that email from Google – did you receive it? (We received two, aren’t we special?)

Then below we’ll tell you against exactly what legislation Google is exhorting you to rise up; you can decide for yourself whether, if passed, this legislation is more likely to hurt your business (as Google suggests), or Google’s business (as Google fears). (Hint: It’s the American Innovation and Choice Online Act (there may be others, but this is the biggie).)

The Letter (Email) from Google

The Senate Judiciary Committee recently voted to move forward a bill that would have unintended consequences for businesses like yours that use digital tools to reach customers. A similar proposal has already made its way through the U.S. House Judiciary Committee, so the threat is real.

If passed, these bills could disrupt many of the digital tools you rely on every day – including Google Ads and Analytics, Gmail and Docs, and your business listing on Google Search and Maps. These changes could make it harder for customers to find your business, hurt your productivity, and cost your business time and money.

If you’re interested in learning more about these bills, their impact on your business, and what you can do about it, we invite you to sign up to stay informed.

Google’s public policy team is working with members of Congress to share concerns about how these bills could impact businesses like yours. Together, we can be an important voice in the policy conversation about the regulations that affect you and your business.

The email includes a big yellow button that says “Stay Informed”, but that only takes you to a page which informs you that you have now been automatically subscribed (with no warning!) to their “Digital Regulation Updates messages”. It’s like being rickrolled only without the cool song, and with being signed up to a mailing list without clearly informed consent (very poor form, Google).

As we mentioned above, the main bill that has been introduced in Congress (with bipartisan support, no less), and about which Google is so worried, and over which they are attempting to whip their customers into a frenzy, is the American Innovation and Choice Online Act, also known as Senate Bill 2992 (“S. 2992” for short). In short, as the summary of S. 2992 explains, the American Innovation and Choice Online Act “prohibits certain large online platforms from engaging in specified acts, including giving preference to their own products on the platform, unfairly limiting the availability on the platform of competing products from another business, or discriminating in the application or enforcement of the platform’s terms of service among similarly situated users.”

You can see why Google is shaking in their boots,

The summary goes on to say that “Further, a platform may not materially restrict or impede the capacity of a competing business user to access or interoperate with the same platform, operating system, or hardware or software features. The bill also restricts the platform’s use of nonpublic data obtained from or generated on the platform and prohibits the platform from restricting access to platform data generated by the activity of a competing business user. The bill also provides additional restrictions related to installing or uninstalling software, search or ranking functionality, and retaliation for contact with law enforcement regarding actual or potential violations of law.”

Limits on the American Innovation and Choice Online Act include that it provides affirmative defenses for the prohibited conduct, and that the FTC and DoJ must designate whether an entity is one that is covered by the act.

“The bill would prohibit dominant platforms from abusing their gatekeeper power by favoring their own products or services, disadvantaging rivals or discriminating among businesses that use their platforms in a way that harms competition on the platform.

It would also prohibit specific forms of conduct that are harmful to small businesses, entrepreneurs and consumers, but that do not have any pro-competitive benefit, including:

Requiring a business to buy a dominant platform’s goods or services for preferred placement on its platform;

Misusing a business’s data to compete against it; and

Biasing search results in favor of the dominant firm.”

Here’s the thing, the American Innovation and Choice Online Act is antitrust legislation. The EU has just decided that the use of Google Analytics in the EU is illegal, (it violates GDPR). And this follows on the heels of Google having just lost its challenges to the 2.8 billion dollar antitrust fine that Google was slapped with by the EU in a different case. So they are panicking. Or, at least, sweating.

It may be that if S.2992 passes you will find some of Google’s offerings becoming restricted, but if so, it’s much more likely to be to Google’s detriment than to yours.

Teen Faces Child Porn Charges for Sending Nude Cell Phone Pics of Self
IRS Reverses Self on 2022 $600 Income Reporting Deadline for Paypal, Venmo, Cash App, Etc... for Now
Yahoo Chat Rooms: You Must Be Over 18 Now
NSA Surveillance Needs Oversight, Says President's Review Group Report and Recommendations
Searchable Full Text of Text Messages Produced by Ambassador Kurt Volker to the House Intelligence, ...
Foreigners Entering U.S. May Be Asked to Provide Facebook, Twitter and Other Social Media Account In...
Buy Google Glass Online - But Today Only
Google Ordered to Disclose Everybody who Searched for a Particular Person in Edina, Minnesota
Share the knowledge

Number of people who have enjoyed this article: 109