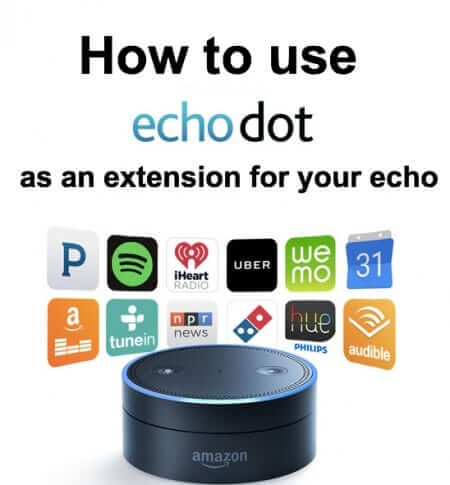 When you first receive your Amazon Echo Dot, you will note that it basically looks like your Echo has been decapitated.


“Bring me the head of Alexa” 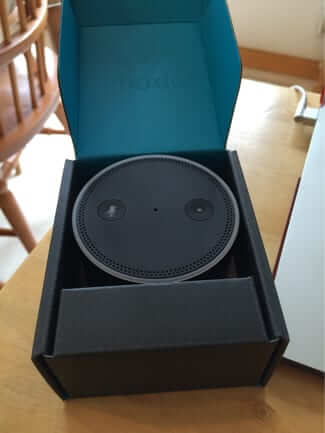 That’s because it is, essentially, the head of an Amazon Echo, without the body (speaker).

You see, again, the difference between the Amazon Echo Tap and the Echo Dot (besides about $40 difference, with the Echo Dot being the less expensive), is that the Echo Dot has no full speaker (but it does have a small local speaker, so it actually works just like a full-sized Echo only with smaller sound), and is corded, while the Echo Tap is essentially a wireless Echo speaker (it claims up to 9 hours of battery life) with Alexa on board, but you have to tap it (hence the name) to get Alexa’s attention (the original Echo and the Dot are both voice activated).

We’re not going to spend a whole lot of time talking about the general setup for the Echo Dot, because it’s essentially identical to the setup for the original Amazon Echo, which you can read about here.

But we do have one caution for you: be sure to look at the very bottom of Dot’s box, because that is where your power cable, and audio cable, are. 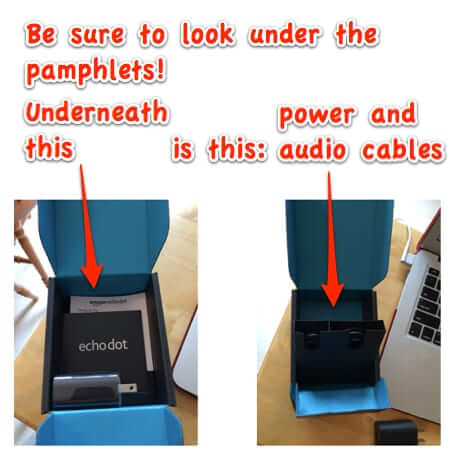 Of course, before you can do that, you have to connect your Echo Dot to your wireless network, so that your phone or tablet can find the Dot (insert obligatory ‘connect the Dots’ joke here). 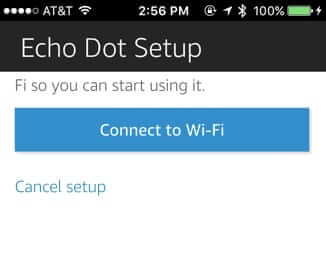 As you are connecting your Echo Dot to your wireless network, you may run into an issue where it just seems to hang when connecting to your wifi network for the first time, or it may even throw you back to the first ‘Connect to Wi-Fi’ screen, even though you were pretty sure that’s what you were just doing.

Your Echo Dot may seem to be be hanging at this screen: 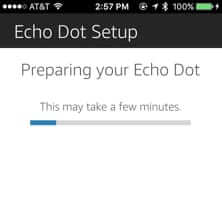 Or it may just throw you back to this screen:

As it happens, after much gnashing of teeth and trying just about everything else, in frustration we rebooted our phone, and whaddaya know, it was all magically set up.

Once your Echo Dot is connected to your own wifi network, you can go on to the next step of disconnecting your phone or tablet from your network, and connecting it to the Echo Dot. 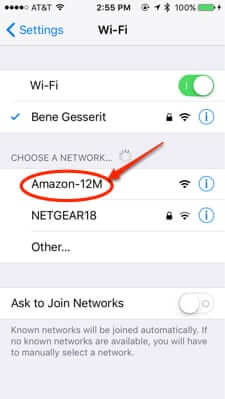 And once you do that, your Dot will show up in the settings in your Alexa app (and your phone or tablet will go back to being connected to your home network). 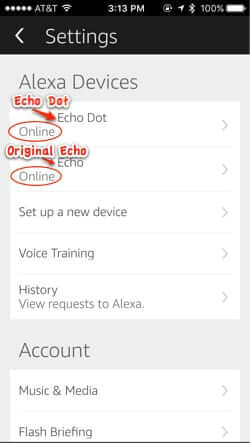 Now is when the fun begins.

You can connect your Echo Dot via the included audio cable to any device or speaker that has an audio input.

BUT! As you may already know, you can use your Amazon Echo as a bluetooth speaker, such as to stream music from your phone to it.

And yes, that does mean that you can also connect your Echo Dot to your original Amazon Echo, using the Amazon Echo as a bluetooth speaker for the Echo Dot, effectively turning your Echo Dot into an extension for your Echo!

Now, why would you want to do this?

Where is your Echo right now? If you’re like a lot of people, it’s in a central room in your house.

And while your Amazon Echo may not be able to hear you when you are in another room, you are able to hear it. By being able to speak to your Echo from a different room, you can avail yourself of all of the Echo’s great features, even when you’re not in the same room to tell it what to do! Because when your Echo Dot, which is voice activated, is connected to your original Echo, using the original Echo as a speaker, it responds to your commands, and plays them through your Echo’s speaker! (And your original Echo will also still respond to voice commands that it hears.) 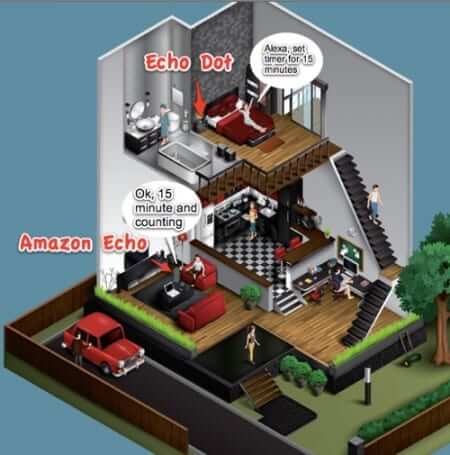 There are any number of ways this can be very useful, from checking the weather in the morning from your bedroom so you know how to dress, to setting the kids’ television watching timer while you’re in the kitchen making dinner, to listening to the news from another room. The possibilities are endless, and it all depends on where you put your Dot.

Here’s how to figure out where to put your Echo Dot:

From what room do you most often yell at your Amazon Echo, then have to come out of the room and yell at it again for it to ‘hear’ you?

That’s the room in which to plug in your Echo Dot.

So you don’t have to scroll up to find it, here’s the link again to the instructions for how to connect and use your Amazon Echo as a bluetooth speaker.

And while you’re at it, you might also enjoy reviewing these: