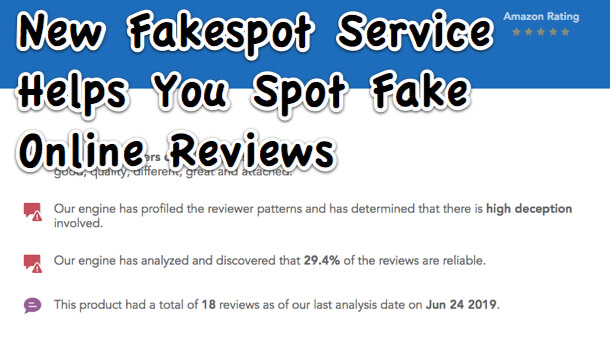 How to detect fake reviews is a real problem in the digital age, and we’ve written before about how to tell fake reviews from real ones, and generally how to spot fake reviews. Now there is a new tool in the fake review spotting arsenal: Fakespot.

We’ve been helping our readers to not be taken in by fake reviews for years, since at least when we first wrote our piece How to Make Sure You’re Not Reading Fake Reviews on Yelp, Expedia, Trip Advisor, and Other Review Sites. That was in 2013.


In 2015 Amazon started cracking down hard on fake reviewers and their fake reviews. In fact in October of 2015 Amazon filed a lawsuit against over 1000 individuals who were selling fake reviews on sites like Fiverr.

Of course, you need to go even further back to get a sense of the value of good reviews to businesses, and the lengths to which not only the businesses, but the curators of those reviews, will go in an effort to generate the almighty dollar, and to keep their competitors from getting that same dollar. For example, Yelp was caught removing good reviews, causing the ratings of those businesses to go down – often, it is claimed, because that business wouldn’t pay Yelp protection advertising money.

In fact, Yelp’s antics got so bad that one enterprising business owner, the owner of Botto pizza bistro, started not just asking for, but incentivizing customers to leave a 1 star review, in order to get out from under Yelp’s implied threats to start cutting off fingers remove multi-star reviews for Botto if Botto didn’t start coughing up advertising dollars. This was rather brilliant, as the satisfied customers’ one-star reviews were glowing – they just were listed under a single star instead of the more typical 5 stars. (You can read a story about Botto Italian Bistro and Yelp here.)

If you do visit the Botto site, you will notice that they have a Yelp Meter running on their site, which lives tracks how many of those glowing 1-star reviews Yelp keeps removing. 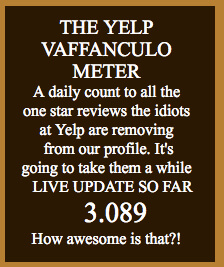 (NOTE: If you want to know what that Italian word between ‘Yelp’ and ‘Meter’ means, you can see the translation here, but be warned that it’s something not to be said in polite company.)

Fakespot Lets You Catch Fake Reviews Before They Catch You

Fakespot is, put simply, a site where you can enter the URL to a page that has reviews, and the Fakespot engine will analyze the reviews and then tell you what its analysis found in terms of the veracity of the reviews, giving an overall letter grade as well as a breakdown of what the analysis saw which led to the letter grade. A letter grade of A means that you can generally rely on the product or service’s reviews as being genuine, a letter grade of F means the reviews are utter BS, with B, C, and D being gradations between.

Fakespot will allow you to put in links with reviews from Yelp, Amazon, Best Buy, Sephora, Steam, Walmart, and Trip Advisor.

As we mentioned, Amazon is doing their level best to get rid of fake reviews. Part of that effort includes no longer allowing Amazon merchants to offer reviewers free merchandise in exchange for a review. However, one of our staff members is a top Amazon reviewer, and still gets these offers (now through the back door) all the time. This means that we have a unique window into which vendors on Amazon are still having incentivized reviews posted on their Amazon page.

While one may split hairs and argue that incentivized reviews aren’t necessarily fake, they are no better than one step removed from a review where the reviewer never actually used the product or service. Actually in the case of Amazon reviews they are more insidious, as the vendors are now having the reviewer purchase the product, and then reimbursing them through Paypal or another payment system, so that when you read their review, it shows as a verified purchase, which leads you to think that their review is genuine.

So, we decided to run two of these Amazon product listings through Fakespot, knowing that some if not most of the reviews were fake, to see what Fakespot had to say about it. 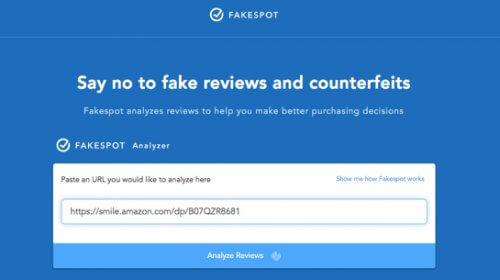 And here’s what Fakespot has to say about the reviews on that page: 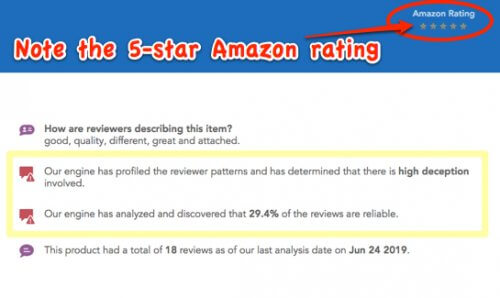 So it’s not at all surprising that Fakespot has given the reviews on this product an F.

To be sure we then tested Fakespot on another product on Amazon for which we knew the vendors were soliciting incentivized reviews. And sure enough, Fakespot gave this product’s reviews an F as well.

And just for fun, we decided to see what would happen when we used Fakespot on the Yelp reviews of Botto Bistro. 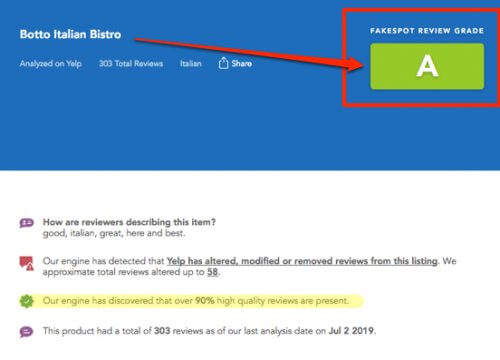 Wait a minute, what’s this? 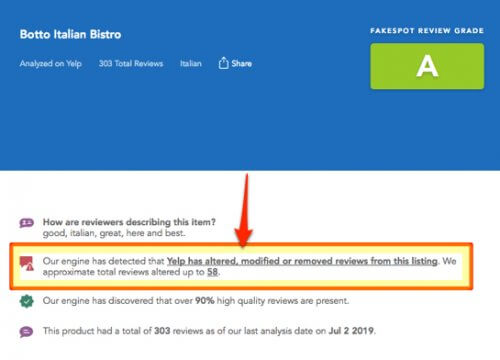 “Our engine has detected that Yelp has altered, modified or removed reviews from this listing. We approximate total reviews altered up to 58.

We think that Fakespot is pretty spot on, which is why we are predicting they will either be acquired, or sued (or both) in the not-too-distant future.

Go here to try out Fakespot for yourself.

How to Become an Amazon Reviewer and Get Free Stuff
Here's How to Export Your Amazon Music Playlist List
Coronavirus Email Scams and Phishing on the Rise - Don't Fall for Them!
How to Report Scammy Facebook Ads on Facebook
Amazon Echo Alexa One-Click Ordering Broken - Just Adds Things to Cart Instead
Amazon Echo Invitation Goes Out with Release Date of "Several Months"
The New Amazon Dash Scanner Wand: What it Is, What it Isn't, and Why the Amazon Flow App is Better
Amazon's New Dash Button - Push to Buy Button is not an April Fool's Joke
21shares