Update: We have just learned that Senator Leahy has withdrawn his support for the amendments to the Electronic Communications Privacy Act (ECPA). He received resounding criticism from many groups and private citizens who felt that the revisions are unconstitutional and a gross invasion of privacy. In a series of tweets, below, Senator Leahy said that he did not support the bill amendments, and seems to deny that he ever did.

The Democratic chairman of the Senate Judiciary committee, Patrick Leahy, has stealthily rewritten a Senate proposal, the Electronics Communications Privacy Act (ECPA), being lauded as one that will protect email privacy, to allow the government to access citizen emails, Facebook wall posts, direct messages on Twitter, and even Google Docs files without a search warrant, just a subpeona. Privacy groups are outraged that a warrant is not required and that a simple subpena will allow law enforcement to search Internet accounts.


[Note: As we have already noted previously data stored in the cloud already does not require a warrant to be accessed by law enforcement]

More than 20 agencies would be allowed this access if the bill, set to be voted upon next week, is actually passed. Those agencies include the Federal Trade Commission, the Federal Maritime Commission, the National Labor Relations Board, and the Federal Reserve. In fact, the bill is now worded as such that Homeland Security and the FBI would be able to gain total access to your Internet accounts without even having to notify you first, and without having to obtain a warrant from a judge.

A rundown of some of the bill’s heinous aspects:

The bill initially required reasonable due process to access private Internet accounts, but Leahy caved after receiving push back from several law enforcement agencies. The roundup of supporters of this revised bill includes:

Those against the new wording of the bill includes:

There is no doubt that that the approval of this bill could have a detrimental impact on cloud-based services if more citizens, worried about their own privacy, opt to store items on external drives. Not long ago, several Internet and communication giants including Amazon.com, AT&T, Twitter, Intel, Facebook, Google, Microsoft, Apple and eBay, formed the Digital Due Process coalition (DDP), which aims to protect the privacy of Internet users. Citing the Fourth Amendment, “The right of the people to be secure in their persons, houses, papers, and effects, against unreasonable searches and seizures, shall not be violated, and no Warrants shall issue, but upon probable cause…” the DDP is seeking to ensure the privacy of Internet users from the prying eyes of the law.

The cornerstone of their philosophy is the fact that technology is constantly changing and advancing, and that the laws surrounding this often-fluid technology need to ensure that users are protected, while still allowing law enforcement to do their job. No doubt that they have a financial stake in the outcome of this vote, as lessened privacy could mean the loss of users. And let’s face it, privacy has never been at the forefront of Facebook’s concerns until faced with a possible setback, such as this bill.

If this bill is enacted, the likelihood of it going to court is high as the DDP and other privacy groups prepare to defend an issue that could negatively impact financial performance for Internet companies, and cross a new line in citizen monitoring that will likely leave many wondering where the privacy invasion will end. And with the financial backing of all of the heavy-hitters in the DDP portfolio, that kind of court battle could bring a whole new meaning to a “Clash of the Titans.”

Update: We have just learned that Senator Leahy has withdrawn his support for the amendments to the Electronic Communications Privacy Act (ECPA). He received resounding criticism from many groups and private citizens who felt that the revisions are unconstitutional and a gross invasion of privacy. In a series of tweets, below, Senator Leahy said that he did not support the bill amendments, and seems to deny that he ever did. 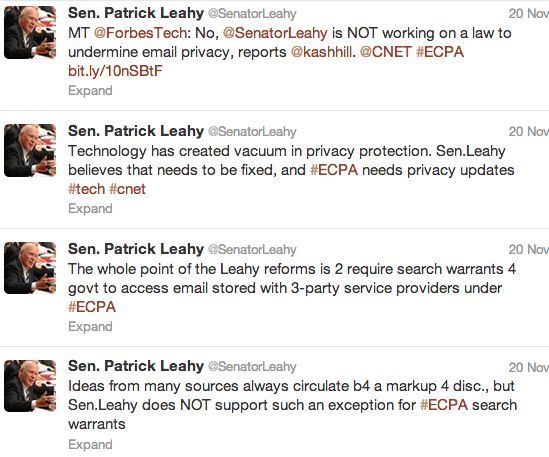 Google Slips Ads in to Google Image Search Results
Urgent Microsoft Vulnerability Update Patch for All Versions of Windows
Teen Driving App DrivePulse Offers Remote Tracking of Your Teen Driver
Massive Breach Exposes Hunting and Fishing License Data in Idaho, Oregon, Washington and Kentucky
The Best Way to Monitor Your Bank and Credit Card Accounts after All the Data Breaches
How to Deal With Embarrassing Tech Mishaps When Working Remotely
What is Remarketing and Why Should You Care? Remarketing Explained
Canadian Clothing Company High on Life's Social Media Stunts at Yellowstone Land Them in Hot Water