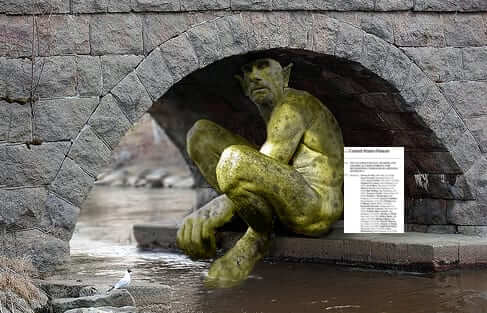 As the US Patent and Trademark Office (USPTO) became more and more flooded with patent applications, what with the increase in emerging technologies, the dot.com bubble, the growth of Silicon Valleys, etc., to name but a few factors, they seemed to be unable to keep up with the glut of new patent applications and, many believe, their approval process became “approve them all, and let the courts sort them out.” Sort of the bureaucratic version of “kill them all and let God sort them out.” And to extend the analogy, a new St. Peter was born. Only, these entities were far from saints – in fact, they are trolls. Oh, excuse us – they are “Patent Assertion Entities”.

Now, to be fair, there is a place for the legitimate Patent Assertion Entity (or “PAE”) – which is an organization whose business model is primarily the purchasing of patents and then the assertion of the rights attendant and pursuant to those patents. But many such outfits really do deserve the term “patent troll”.

Acquiring patents is nothing new. In fact, often small (and not so small) startups are aquired specifically so that the aquiring company can acquire and own the intellectual property (IP) that was developed by the startup.

But specifically acquiring a patent so that you can sue others as a business model and revenue stream, that’s somewhat newer.

Says Chien, in the abstract of her recently published paper:

“The DOJ and FTC held a hearing on patent assertion entities (PAE, defined as an entity that uses patent primarily to obtain license fees, rather than to support the transfer or commercialization of technology) on Dec 10. This talk gives an overview of the economics, policy of patent assertion entities drawing upon previous and new empirical work. Using pathbreaking, disruptive techniques and capturing economies of scale, PAEs drive down the cost of patent enforcement. So far in 2012, PAEs have brought 61% of all patent litigations against fewer defendants than in 2011, due largely to changes in the law through the America Invents Act. 76% of PAE defendants were sued by a PAE that sued more than 15 defendants, and 61% were sued by a PAE that had brought 8 or more cases. These and other details about their business model, practices, and policy concerns are discussed in this powerpoint presentation.”

At the joint Department of Justice (DOJ) and Federal Trade Commission (FTC) workshop where Chien presented her findings, FTC Chairman Jon Leibowitz said, of PAEs, “Supporters of the PAE business model believe that PAEs promote invention and investment in R&D by reducing transaction costs, managing the risks of monetizing inventions, maximizing revenue, and compensating small inventors. Not surprisingly, others believe that PAE activity imposes a “tax on innovation,” undermining the incentives to engage in R&D. Detractors also raise concerns about operating companies transferring IP to PAEs as a means of raising rivals’ costs. If that is actually happening – perhaps because of asymmetries of information and liability – it would seem, well, kind of unsavory.”

So in which camp do you fall, dear reader? Do you think that Patent Assertion Entities are a good thing? Or are they all just so many patent trolls?

Full Text of Subpoenas Issued to the Pentagon and OMB by the House Intelligence, Foreign Affairs and...
Man who Killed Wife, and Posted Picture and Confession on Facebook, Convicted of Murder
Searchable Full Text of Whistleblower Complaint Regarding President Trump
Google Ordered to Disclose Everybody who Searched for a Particular Person in Edina, Minnesota
Burgler Uses Victim's Computer While in Home: You Won't Believe What He Did Next!
The Aereo Supreme Court Decision in Plain English
Administration's New Disinformation Governance Board Confirmed During House Hearing
Snapchat Spanked by FTC over "Messages Disappearing Forever" Deception
Share the knowledge

Number of people who have enjoyed this article: 1,521