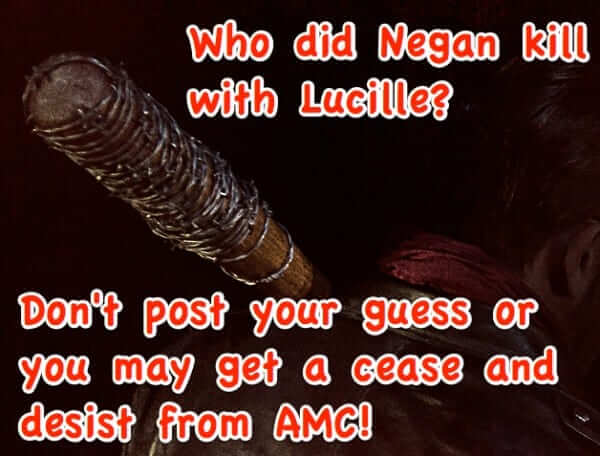 One of the top Walking Dead spoiler fan sites, The Spoiling Dead Fans, has received a cease and desist letter from AMC’s lawyers over concerns that the site would post spoilers as to who was the ‘Lucille victim’ in the season 6 finale of The Walking Dead. (AMC stands for American Multi-Cinema, and the full name of the company is American Multi-Cinema Film Holdings.) AMC is, of course, the network that distributes The Walking Dead.

The identity of the so-called “Lucille victim” from that Season 6 finale is the show’s big cliffhanger: who did Negan, leader of the Saviors, kill with his weapon – a barbed wire wrapped-baseball bat named “Lucille” – in the final moments of the show?

For those not familiar, The Spoiling Dead Fans, which is also known as TSDF, is a site where Walking Dead fans participate in discussion forums, including posting spoilers of not-yet-aired episodes.

Spoilers may be posted by forum members, and also by TSDF staff. The site’s proprietor goes by the handle ‘ShinyFirefly’, and there are others who help admin the forums, including a spoiler team. Says the site:

We have a spoiler team at the forum who sometimes post “official” confirmed spoilers. These are noted with a red “TSDF OFFICIAL!” tag. If no such tag exists, the spoiler is not official, even if it is posted by a staff member. You should not republish unofficial information and insinuate that TSDF has declared it “confirmed.” It can quickly turn into one giant game of internet “Operator” and it can sometimes take days to clear it up (if at all).

Members are welcome to post spoiler information here that they find elsewhere.

The site also has a fairly strict set of guidelines regarding the posting of spoilers, which even includes rules to protect against copyright violation, among other things. These rules include:

Any TV show spoiler posted outside of the Spoiler Forum must be contained within spoiler tags. Info from the comics is not considered a spoiler and doesn’t need tags. No spoilers allowed in thread titles. For a tutorial on how to use the tags, click here.

You may post text and images you find on social media.

Do not publish any confidential spoiler sources.

If you post a thread containing a spoiler or possible spoiler found from a public source (any spoiler site, magazine, online media site, etc.), please post a link to the source.

If you post un-watermarked photos, you should provide a link to the original source of those photos. Do a little research before spreading around what might be untrue information.

Staff reserves the right to remove any spoiler information that infringes on the trademark/copyright rights of another.

If you prefer, you can always send spoiler information or questions to our spoiler chasers for posting or for verification before you post.

Information is considered a spoiler until the episode first airs in the U.S.

Spoilers can come from pretty much anywhere, including from fans who read other sites and then repeat a spoiler, and from members of the public if they happen to be standing outside somewhere that a production crew is filming, or even if they overhear someone at coffee talking about something that someone else saw. (See, for example, photos of production filming taking place at an outdoor location on the Spoiling Dead Fans Facebook page.) You can imagine that this is not all that uncommon in areas of the country where television shows and movies are produced.

Sometimes, however, the information comes from confidential sources or, even, industry insiders with inside knowledge.

And therein lies the rub. Because if the spoiler information does in fact come from someone with actual knowledge of what is going to occur in an upcoming episode, that information may be intellectual property that is protected by copyright.

And that brings us to AMC’s cease and desist letter. Here is the relevant part of that letter, written on behalf of AMC by attorney Dennis Wilson, with Kilpatrick Townsend & Stockton:

I am intellectual property litigation counsel for AMC Film Holdings, LLC and its subsidiaries and affiliated companies (“AMC”), which owns the rights in and to the television series “The Walking Dead.”

This is an urgent matter.

AMC is aware that The Spoiling Dead Fans site is promoting your claim that you have received copyright protected, trade secret information about the most critical plot information in the unreleased next season of The Walking Dead. You also state that you plan to distribute this purported highly confidential information despite your knowledge that such distribution, if the information is indeed accurate, is unauthorized and will greatly damage AMC, distributors of The Walking Dead as well as Walking Dead fans awaiting the new seasons’ release who wish to watch their favorite show unspoiled.

The release of plot summaries and particularly the types of crucial plot elements that you have stated you intend to release, have been found to constitute copyright infringement. Specifically in Twin Peaks Productions v. Publications International, the Court ruled that publishing a work that “recounts for its readers precisely the plot details” of a fictional work constitutes copyright infringement.

AMC protects its intellectual property rights in its creative works, including by employing careful and intricate security for its plot information, scripts, sets, production facilities and post production houses. By advertising the illegal disclosure of intricate plot details of an unreleased episode of The Walking Dead without authorization you will willfully and intentionally impair the commercial viability of the show and thus AMC’s ability and incentive to continue to produce creative works such The Walking Dead.

In light of the above, we demand that you repudiate your intent to leak the “Lucille Victim” by confirming that you will cease and desist from that illegal disclosure and/or assisting others in the illegal disclosure. Should you fail to do so, AMC will file a lawsuit against you to enjoin your harmful illegal activities and seek to obtain money damages and injunctive relief to address your conduct.

Nothing contained in this letter constitutes an express or implied waiver of any rights, remedies or defenses of AMC, all of which are expressly reserved.

All of this is predicated on the alleged claim that TSDF stated that they had inside information about the Lucille Victim story line, a claim which TSDF refutes.

Says TSDF, on their Facebook page, “They say we can’t make any type of prediction about the Lucille Victim. Their stance is that making such a prediction would be considered copyright infringement. AMC tells us that we made some claim somewhere that says we received “copyright protected, trade secret information about the most critical plot information in the unreleased next season of The Walking Dead” and that we announced we were going to disclose this protected information. We still aren’t sure where we supposedly made this claim because they did not identify where it was.”

The thing is, people can guess at what is going to happen next in their favourite show, and so someone who is particularly good at putting two and two together and coming up with four, and who then posts “4!”, can be viewed as having just posted a spoiler, even though it was a lucky guess – an educated guess, yes, but a guess all the same.

But even if what they post about the Lucille Victim is based 100% on pure conjecture, TSDF fears that AMC will come after them.

“Basically,” says TSDF, “what it all comes down to is if we post our Lucille Victim prediction and we’re right, AMC says they will sue us. Whether there are grounds for it or not is not the issue, it still costs money to defend. That is the way our justice system works. Would we have defenses? Sure. But it also costs money to mount that defense. If someone brings us a potential Lucille spoiler and we confirm it and it turns out accurate we could get sued.”

And so, The Spoiling Dead Fans site has had to tell their 40,000+ members that they will not allow any spoilers about the Lucille Victim on the site, at all. They just can’t afford it.

Meanwhile, as CelebDirtyLaundry points out, “The National Enquirer reveals the victim was was (sic) Lucilled via information from a set insider on TWD.” (You can read the National Enquirer story, which starts the spoiler by saying that “you don’t have to wait till season seven to uncover the pulped person — The National ENQUIRER’s on-set spies said the victim is…” here.)

Be that as it may, The Spoiling Dead Fans site has taken the position that they simply can’t afford to take on AMC right now, and frankly we don’t blame them.

You can read the Spoiling Dead Fans full statement on the issue here on their Facebook page.

Number of people who have enjoyed this article: 915