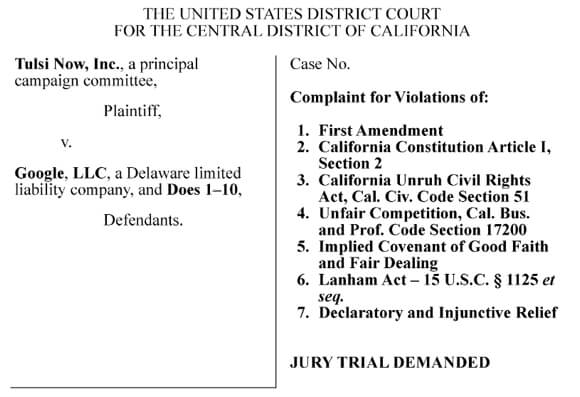 Democratic Presidential candidate Tulsi Gabbard and her Tulsi Now campaign have filed a lawsuit against Google, citing election interference because Google has suspended her Google ads (Adwords) account. Tulsi also accuses Google of putting her email into the Google and Gmail spam folders at a higher rate than other candidates, frankly a claim that we find more interesting.

According to Gabbard’s lawsuit (full text of Tulsi Gabbard v. Google here), “Since at least June 2019, Google has used its control over online political speech to silence Tulsi Gabbard, a candidate millions of Americans want to hear from. With this lawsuit, Tulsi seeks to stop Google from further intermeddling in the 2020 United States Presidential Election.”

In addition to the aspect of suing for going to the junk folder (a tactic that many spammers have taken – and lost), it’s interesting to note that Gabbard’s lawsuit comes at a time when there is heightened sensitivity to election interference, and when there is already heightened scrutiny on Google.

1. We live in a time of unprecedented political upheaval and division in the United States. Uncertainty and mistrust in American institutions – most notably, the United States government – are at record highs. Everything from basic norms of civility and compromise to the sanctity of American elections suddenly seems in flux. Americans wonder how we got here, and they want to know where we’re going.

2. Against this backdrop, it is not surprising that the race for the 2020 Democratic nomination for President of the United States is the most hotly contested and the most politically open – in recent memory. Americans want to hear fresh, diverse voices as they seek a new leader in this time of turmoil. Americans need to hear those voices.

3. Tulsi Gabbard is one of those voices. Gabbard is a four-term United States Congresswoman, a Major with over sixteen years in the National Guard, and the first female combat veteran to run for President.

The gist of the lawsuit is based on the complaint that following the June 26th and 27th Democratic candidate debates, on June 28th, Google suspended Gabbard’s Adwords account (through which one creates and displays ads by Google), with no warning, and no explanation. When the Tulsi Now campaign tried to reach Google, and tried to find out why the account and ads were suspended, they got “opacity and an inconsistent series of answers from Google.” (It should be noted here that this is a frustration shared by legion Google Adwords and Adsense publishers – Google is notorious for this.)

First, Google claimed the Account was suspended because it somehow violated Google’s terms of service. (It didn’t.) Later Google changed its story. Then it changed its story again. Eventually, after several hours of bizarre and conflicting explanations while the suspension dragged on, Google suddenly reversed course completely and reinstated the Account. To this day, Google has not provided a straight answer – let alone a credible one – as to why Tulsi’s political speech was silenced right precisely when millions of people wanted to hear from her.”

Basically Gabbard is saying that immediately following the debate on the 26th and 27th, millions of people would be searching for her, and unable to find her because on the 28th Google suspended the Tulsi Now ad campaign on Google.

At least one legal pundit who has read the full complaint (as have we) said that they don’t see much in the complaint to actually support the claims of the Tulsi Now campaign. We aren’t so sure. For example, the claim above that millions of people were searching for Tulsi Gabbard and were unable to find her because Google was not displaying their ads can be fairly readily substantiated (or indeed refuted) by subpoenaing the search records for that time period from Google.

On the other hand, if you have to rely on Google ads for people to find you in their search efforts, rather than on the strength and merit and SEO of your website, and other efforts, you may have bigger problems than just whether Google displays your ads.

As for the claim about Google putting the Gabbard campaign’s emails in the spam folder, Gabbard and campaign say:

Perhaps there are no technical explanations – on the other hand there may be, such as if the Gabbard campaign isn’t publishing DMARC and DKIM, or is using more spammy language than some of the other campaigns. Or if more Gmail users marked the Gabbard email as spam, which would cause an increasing amount of the email they send to go to the spam folder.

There are just so many variables when it comes to why email ends up in the spam folder, but, again, these things can be discovered by issuing a subpoena to Google for that information. That is, in fact, why it’s called ‘discovery’.

The lawsuit also observes that “Few Gmail users regularly check their spam folders. Many never do,” and that is of course completely true.

In fact, generally speaking the lawsuit is an interesting read, including screen captures of Twitter Tweets from Gabbard, a foray into anti-trust, and a breakdown of Google’s contributions to various campaigns.

So give the lawsuit a read below and let us know which aspects you find most interesting!

EFF, Bunnie Huang, File Lawsuit to Invalidate Onerous Anti-Research Provisions of DMCA
Mugshot Sites Sued for Charging for Removal of Mugshots
How to Have Gmail Automatically Delete Foreign Language Spam So You Don't Have To
Explained: What is "Web caches and other" on an Adsense Report?
Gmail Introduces Shelfie for April Fools Day
Craiglist Sued for Being World's Biggest Pimp
U.S. Indicts 5 Members of China PLA's Unit 61398 for Economic Espionage (Full Text)
Teen Prosecuted as Adult for Having Naked Pictures of Himself on His Own Phone
Share the knowledge