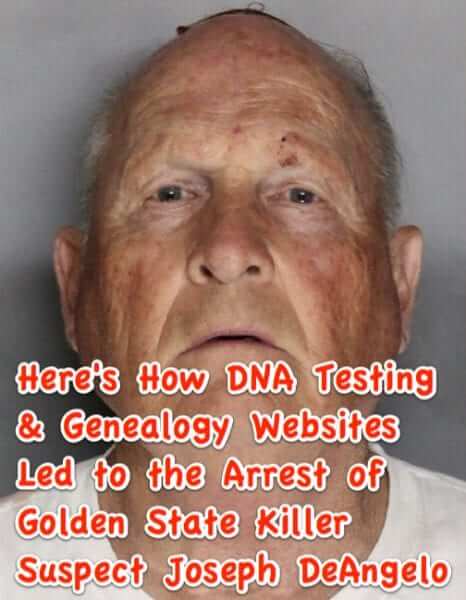 We’ve warned for years that sites where you can get your DNA tested, such a 23andMe.com and Ancestry.com, are fertile ground for law enforcement. And while you may have heard that the original night stalker, the Golden State Killer (originally dubbed the East Area Rapist) was tracked through GEDmatch.com, where people only upload the DNA test results that they get elsewhere, such as from 23andMe or Ancestry, make no mistake, law enforcement have also been searching those two sites.

In our article Law Enforcement is Searching Ancestry.com and 23andMe DNA Databases, we cautioned that law enforcement has been mining these sites since at least 2015.

As we mentioned in that article, regarding a case where the FBI identified the wrong person based on DNA evidence they had found in the Ancestry.com database, “They were investigating the nearly-20-year-old murder of Angie Dodge, in Idaho Falls, and having run a familial DNA search on Ancestry.com, looking to match DNA found at the scene of the crime, they decided that Usrys fathers DNA, which was in the Ancestry.com database, was a close enough match that it warranted (no pun intended) checking out Usry as a suspect.”

So those of us who follow these things are not even a little bit surprised that the Golden State Killer was tracked using DNA detection.

If people have known this was a possibility, why, for the love of privacy, are people still getting their DNA tested (and so catalogued) through these sites?

There are a few possible reasons:

The reality is that people around the world have given up all kind of privacy without a second thought. In fact, giving up privacy is now the default state for the majority of people, starting with the arrival of the Internet, and culminating with smartphones.

Plus, everyone else does it, so why not?

Anyways, back to the case at hand. Here’s how law enforcement used DNA testing data from those sites to track down the Golden State Killer.

While many news outlets have said simply that the trail leading to the Golden State Killer was through some genealogical websites, the New York Times has indicated that the ultimate DNA match came from GEDmatch.com.

Now, to be fair, GEDmatch.com appears to have taken measures to protect their data as much as possible, at least that’s what we infer from the fact that they even have prohibited Google from scraping their site, by excluding Google in their robots.txt file.

(Clicking on ‘Learn why’ leads to this explanation: “The page owner blocked this page from Google in a suboptimal way, so we couldn’t create a good page description. If you know the site owners, let them know that “robots.txt is blocking Google and can’t create a site description in search results”.”)

And, in fact, GEDmatch makes a point of saying that “In today’s world, there are real dangers of identity theft, credit fraud, etc. We try to strike a balance between these conflicting realities and the need to share information with other users. In the end, if you require absolute privacy and security, we must ask that you do not upload your data to GEDmatch. If you already have it here, please delete it.” (Their exclusion from Google is so complete that you can’t even find their page where they say that if you try to Google it.)

Beyond that, it appears, from a quote from GEDmatch’s lawyer in that New York Times piece, that GEDmatch is none-too-pleased about the unwitting role they played in this drama.

Explained GEDmatch lawyer Blaine Bettinger, “The purpose was to make these connections and to find these relatives. It was not intended to be used by law enforcement to identify suspects of crimes.”

By all accounts, law enforcement was able to obtain some well-preserved DNA from one of the crime scenes, DNA which they had reason to believe was the suspect’s DNA.

Then, according to multiple news accounts, when they had focused in on DeAngelo, they then, according to Sacramento District Attorney Anne Marie Schubert, collected samples of his DNA from, and we quote, “abandoned DNA”, which, Schubert explained, is when you leave your DNA in a place that is a public domain.

For example, spitting on the sidewalk, leaving a cigarette you have smoked in a public ashtray or garbage can, or even leaving a glass from which you have had a drink in a bar or restaurant.

So here are the steps we believe, based on the evidence available to us, they took with respect to the DNA:

They uploaded the still unidentified suspect’s DNA (from the crime scene) to GEDmatch.com.

And while they did not find DeAngelo’s DNA on GEDmatch, they did find partial matches to several of his relatives. And, not just that, but family trees that were essentially maps to other relatives.

Once the DNA had provided a population of suspects or the suspect’s relatives, they narrowed the suspect pool down until they zeroed in on DeAngelo. Then they tailed DeAngelo, and collected some of his ‘abandoned’ DNA to see if it matched the suspect’s DNA from the crime scene.

The Sacramento county sheriff in on the sting said that DeAngelo looked very surprised when he exited his house only to find himself in the clutches of law enforcement, being arrested.

For their part, GEDmatch released the following statement:

To correct a BIG misunderstanding, we do not show any persons DNA on GEDmatch. We only show manipulations of data such as DNA [matches].

We understand that the GEDmatch database was used to help identify the Golden State Killer. Although we were not approached by law enforcement or anyone else about this case or about the DNA, it has always been GEDmatchs policy to inform users that the database could be used for other uses, as set forth in the Site Policy

While the database was created for genealogical research, it is important that GEDmatch participants understand the possible uses of their DNA, including identification of relatives that have committed crimes or were victims of crimes.

If you are concerned about non-genealogical uses of your DNA, you should not upload your DNA to the database and/or you should remove DNA that has already been uploaded. To delete your registration contact [email address obscured].

Number of people who have enjoyed this article: 509