This week Amazon opened its second 4 Star by Amazon store (the first is in New York City) at the Park Meadows shopping center in Lone Tree, Colorado, a suburb of Denver. It’s interesting to note that Denver got its Amazon 4 Star store even before tony Berkeley, California, which is slated for the third 4 Star store in the near future. (List of Amazon 4-Star store locations below.)

It’s also interesting to note that both the Colorado and soon-to-be opened California stores are in the same locations as Apple stores, bringing the two competitors directly head-to-head.

The aptly named 4 Star Amazon stores (the stores feature items that are ranked 4 stars and above in Amazon reviews) are not Amazon’s first forays into brick & mortar stores, but they are certainly the most comprehensive.

However, the Amazon 4-Star stores are a whole new level of shopping experience. It’s like walking through the pages of the Amazon website, only you can actually touch and experience the items before you buy them.

In fact, that’s exactly the plan. Says Amazon on their Amazon 4-Star stores page, “We’ve designed our stores around our customers – what they’re buying and what they’re loving. We’ve used customer ratings, reviews, and sales data from the hundreds millions (sic) of products online to curate our store with features like “Most-Wished-For” and “Frequently Bought Together.” These features, along with customer review cards that have quotes from actual customer reviews, make it fun and easy for customers to discover great products.”

One of the experiences that Amazon touts for their 4 Star stores is the ability to actually play with Kindles, Echos, and other Amazon devices before buying it. And Amazon sales associates are on-hand to answer questions about the devices.

Perhaps most interesting, however, and little-covered in the press, is the fact that there are two different prices for every item: the regular (market?) price, and the price that Amazon Prime customers pay – or, what Amazon is calling, the “Amazon.com price”. 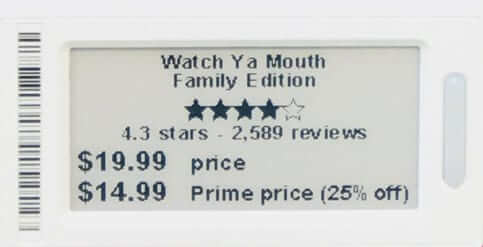 This is a shrewd move on the part of Amazon, opening in-person stores just before the shoppingest holidays. We’re betting that they will wish they’d opened more before the 2018 shopping season, and we have to think that by the end of 2019 there will be several more. For now, here is a list of the current (or soon-to-be-open) locations.

Amazon Rolls Out Free Samples Program - How to Get Free Samples from Amazon and How to Stop Them
How to Add Your Amazon Store Card as a Payment Option, How to Find the Expiration Date, and How to M...
Amazon Music Playlists Gone? Try This! Plus Amazon Shutting Down Customer Forums!
Amazon Sidewalk Uses Your Alexa Devices to Share Your Internet with Your Neighbors Unless You Opt Ou...
Amazon Pledges to "Upskill" Employees Instead of Laying Them Off
Amazon's Denial of Amazon Vendor Purge Isn't Convincing in Light of Facts and Figures
Massive Capital One Breach of Data Stored on Amazon Affects Millions
Amazon Echo Invitation Goes Out with Release Date of "Several Months"
Share the knowledge

Number of people who have enjoyed this article: 816