Nasim Najafi Aghdam, the woman who went to YouTube headquarters on Tuesday, April 3rd, and shot three people before killing herself, was clearly and increasingly angry at YouTube for, as she saw it, censoring her and intentionally suppressing her revenue.

On her website, nasimesabz.com, Aghdam wrote “BE AWARE! Dictatorship exists in all countries but with different tactics! They only care for personal short term profits & do anything to reach their goals even by fooling simple-minded people,hiding the truth, manipulating science & everything, putting public mental & physical health at risk, abusing non-human animals, polluting environment, destroying family values, promoting materialism & sexual degeneration in the name of freedom,….. & turning people into programmed robots! “Make the lie big, Make it simple, Keep saying it, And eventually they will believe it” Adolf Hitler… There is no free speech in real world & you will be suppressed for telling the truth that is not supported by the system. Videos of targeted users are filtered & merely relegated, so that people can hardly see their videos! There is no equal growth opportunity on YOUTUBE or any other video sharing site, your channel will grow if they want to!!!!!”


Screenshot of the Above Diatribe from nasimesabz.com

Ironically, according to CNN, Mountain View police had conversed, in person, with Aghdam, just hours before. Aghdam’s family had reported her missing from her San Diego home, and when police saw her asleep in her car at 1:40 a.m., in a Mountain View parking lot, after running the plates they realized she was the woman who had been reported missing.

Said a Mountain View PD spokesperson, “We contacted the woman inside the vehicle, who was asleep, to check on her and to determine if she was the same person who had been reported missing. At no point during our roughly 20 minute interaction with her did she mention anything about YouTube, if she was upset with them, or that she had planned to harm herself or others … she was calm and cooperative.”

After the shooting, however, during which Aghdam wounded three people at YouTube’s San Bruno headquarters before turning her gun on herself and killing herself, San Bruno PD police chief Ed Barberini explained that “we know she was upset with YouTube, and now we’ve determined that was the motive.”

While it is not yet known what, if anything, Aghdam said during the shooting, it is very clear from her website – which has now been taken down, almost certainly at the request of law enforcement – that she was extremely upset with YouTube, whom she accused not just of censoring her, but of intentionally limiting the access to and views of her videos, directly limiting her revenue from the videos. 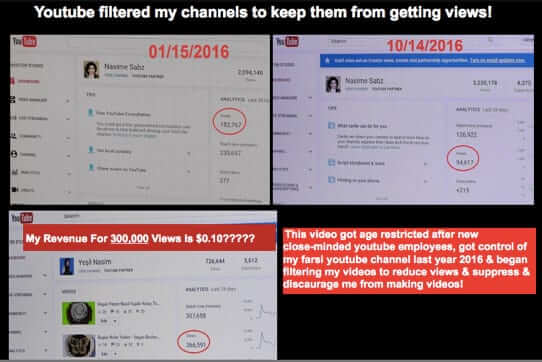 Elsewhere she complained regarding one of her videos, “This video got age restricted after new close-minded youtube employees, got control of my farsi youtube channel last year 2016 & began filtering my videos to reduce views & suppress & discaurage (sic) me from making videos!”

While this incident is of course tragic, it will be interesting to see whether Aghdam’s family sues YouTube, forcing them to open the kimono and reveal in fact what, if anything, was going on behind the scenes that contributed to what Aghdam was seeing happen to her YouTube account and views.

How to Make a Custom Playlist URL on YouTube
Are App Icons Giving Us Cognitive Overload As They Fight For Our Attention?
Internet addiction: Is it Time to Unplug?
How to Protect Your Digital Footprint from Prying Relatives and Friends
Why is Adobe Flash Player Being Discontinued? We Explain
Save Money with Our List of the Best Free Streaming Services
Pakistan Accidentally Triggers YouTube Outage Around the World
16 Year Old Phenom Makeup Artist James Charles Garners Over 200k Followers
10shares