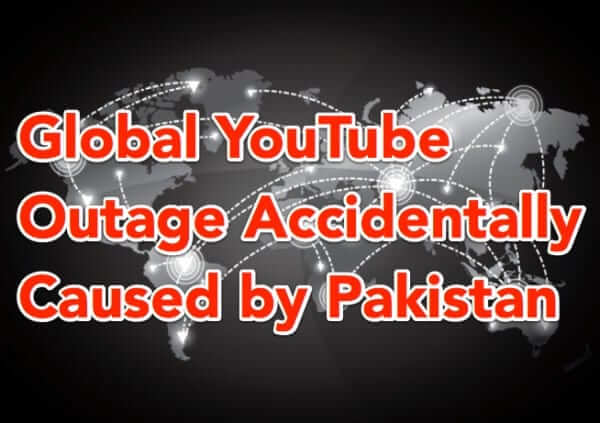 Hundreds of thousands of would-be video watchers found that YouTube was down for them over the weekend – in fact it’s still down for some people – because of an oopsie by the Pakistan government, trying to block its own people from accessing YouTube. Instead, Pakistan accidentally ended up blocking as much as 2/3 of YouTube users around the world from accessing YouTube.

According to a YouTube spokesperson, “For about two hours, traffic to YouTube was routed according to erroneous Internet Protocols. Many users around the world could not access our site. We have determined that the source of these events was a network in Pakistan. We are investigating and working with others in the Internet community to prevent this from happening again.”

It is ridiculously easy for someone to black-hole a website for much of the world by accident.

The reason that Pakistan was trying to block all of their own users from YouTube is owing to the upcoming release of a film by Dutch politician Geert Wilders. Wilders has recently introduced legislation in the Netherlands to ban Islam in the Netherlands because, the bill says, “Islam is not a religion or a philosophy of life but a violent, totalitarian ideology.”

Wilders’ proposed legislation goes on to say that “The Netherlands is a fantastic country. Life here is good. We can attribute that to our Judeo Christian and humanistic norms and values, which form the foundations of our democracy and rule of law. Our culture and civilisation are characterised by freedom, self-will, openness, tolerance and equality. Our forefathers spent blood, sweat and tears defending our freedom, identity and prosperity. For that, we are grateful to them but it also gives us a major responsibility. It is our duty to pass this inheritance of freedom and democracy to our children. We should not remain blind to the existential danger that threatens the Netherlands and its people these days: Islam. Islam is a totalitarian, intolerant and violent political ideology of conquest, disguised as a religion. It aims to destroy our democracy and replace our legal system with Islamic law, the sharia. The aim of Islam is to establish an Islamic empire. Not only is this aim at odds with our culture, our norms and values, our rights and freedoms, it also threatens them.”

The film that is backed by Wilders, to be released on YouTube, has been said to be “portraying Islam as fascist and prone to inciting violence against women and homosexuals.”

As such, the Pakistan Telecommunication Authority (PTA) ordered Pakistan’s Internet service providers (ISPs) to block access to YouTube within Pakistan.

However, a failure to verify changes ended up making YouTube inaccessible for as much as two-thirds of the online world, according to Renesys Corporation.

Basically, what happened was this:

The Pakistan Telecommunications Authority ‘black-holed’ YouTube (i.e. created a path that would take browsers requesting YouTube to a ‘null route’ instead of YouTube). So when a user in Pakistan pointed their browser at YouTube, the new routing info would be used to instead take their browser to the null route. That was what Pakistan wanted and intended to do. Unfortunately, they then pushed that routing to their international data carrier, PCCW in Hong Kong. So Pakistan Telecom had made a change to routing tables that redirected an IP block for YouTube – which included all of the DNS servers that direct traffic to YouTube.

That had the effect of PCCW, an international Internet routing carrier, sending requests for YouTube to Pakistan, where YouTube was now black-holed.

Compounding the issue is that PCCW is one of the top 20 largest data carriers in the world, so their routing tables are pushed along to other carriers around the world.

Now, had PCCW, or indeed any of the carriers that grabbed that routing table, verified the data in it first, the YouTube outage could have been much smaller, and maybe even only limited to Pakistan as intended.

But we think that’s not the primary point here.

The primary point is this:

It is ridiculously easy for someone to black-hole a website for much of the world by accident.

What should we do about that?

Woman Widowed by Terror Attack Sues Twitter for Enabling ISIS
Save Money with Our List of the Best Free Streaming Services
Google Paying $29.5 Million To Settle Lawsuits Over User Location Tracking
How to Identify False Information Online
What is Google Alphabet? It's Google's New Parent Company - But the Domain Belongs to BMW
Is Your Gmail Account Almost Full? Here's How to Find and Delete the Email with Big Attachments
A 25 Year History of the Internet World Wide Web in a Handy Timeline
Internet Deception: Why It's So Easy and How to Detect It
Share the knowledge

Number of people who have enjoyed this article: 1,030