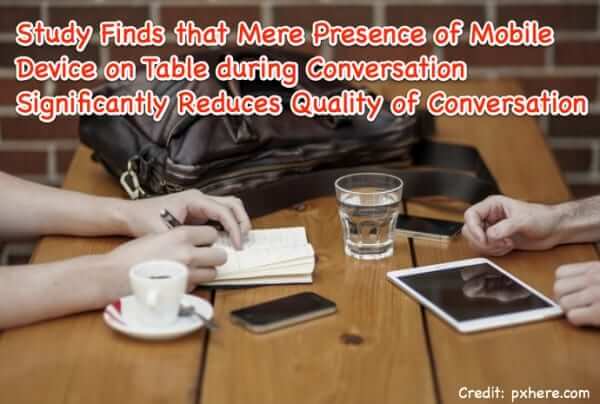 A study out of Virginia Tech, dubbed “The iPhone Effect”, found that even just the very presence of an iPhone or Android phone, or other versions of smartphones, has a substantial negative impact on the quality of in-person conversations and connection. It also introduces us to the concept of ‘polyconsciousness’.

While the study was conducted in 2014, it was published with little fanfare outside of psychology circles; in fact we only learned of it ourselves yesterday.

The abstract of the study, published on the website of the American Psychological Association, states that the study “examined the relationship between the presence of mobile devices and the quality of real-life in-person social interactions. In a naturalistic field experiment, 100 dyads were randomly assigned to discuss either a casual or meaningful topic together. A trained research assistant observed the participants unobtrusively from a distance during the course of a 10-min conversation noting whether either participant placed a mobile device on the table or held it in his or her hand. Using Hierarchical Linear Modeling, it was found that conversations in the absence of mobile communication technologies were rated as significantly superior compared with those in the presence of a mobile device, above and beyond the effects of age, gender, ethnicity, and mood. People who had conversations in the absence of mobile devices reported higher levels of empathetic concern. Participants conversing in the presence of a mobile device who also had a close relationship with each other reported lower levels of empathy compared with dyads who were less friendly with each other.”

Their mere presence in a socio-physical milieu, therefore, has the potential to divide consciousness between the proximate and immediate setting and the physically distant and invisible networks and contexts.

Put in plain English, the researchers observed, from a distance, 100 pairs of people having conversations about an assigned topic (some topics were serious, others not-so-serious). Across the board, if there was a mobile device present – even if it was not used, but was just passively present – people reported the quality of the conversation and the connection, including empathy, as lacking, while the people who had conversations with no mobile device present reported having more meaningful conversation and connection.

Of course, it makes sense that fielding phone calls and text messages would reduce the quality of the conversation. But this isn’t that. This is the phone just being present, not ringing or beeping.

It also makes sense if you think about the affect on a conversation, and a sense of connection with the other person, if you are constantly glancing at your phone.

However, even if you never look at the phone, the study found that its very presence impacts the quality of your conversation.

Explains the study’s authors (Misra, Cheng, Genevie & Yuan), “Even when they are not in active use or buzzing, beeping, ringing, or flashing, they are representative of people’s wider social network and a portal to an immense compendium of information. In their presence, people have the constant urge to seek out information, check for communication, and direct their thoughts to other people and worlds. Their mere presence in a socio-physical milieu, therefore, has the potential to divide consciousness between the proximate and immediate setting and the physically distant and invisible networks and contexts. The permeable and fluid pervasive computing environments of our technological society and the array of behavioral demands they create thus dramatically change the socio-physical context of face-to-face communication. In these permeable and micro-fragmented contexts, we are in a constant state of polyconsciousness in which multiple relationships and settings can be the focus of one’s attention at any given time regardless of location or context.”

What the study doesn’t bring to the fore is the message that having your phone out – even if you are ignoring it – sends to the other person.

Because of the fact that, as the study points out, your mobile device, sitting on the table (or in your hand) while talking, is the portal to both your social network and to an “immense compendium of information” (but mostly the former), having your phone out is not unlike, to the other person, having many people at your beck and call, any of whom might pop in at any time. And, because your portal is there on the table or in your hand, the perception that you are keeping your eye or ear out for any of those third-parties diminishes – or dilutes, if you will – the quality of the conversation you are having with the actual person who is in front of you.

We’ve all experienced this, on one side or the other of this; what have your experiences been?

Number of people who have enjoyed this article: 730