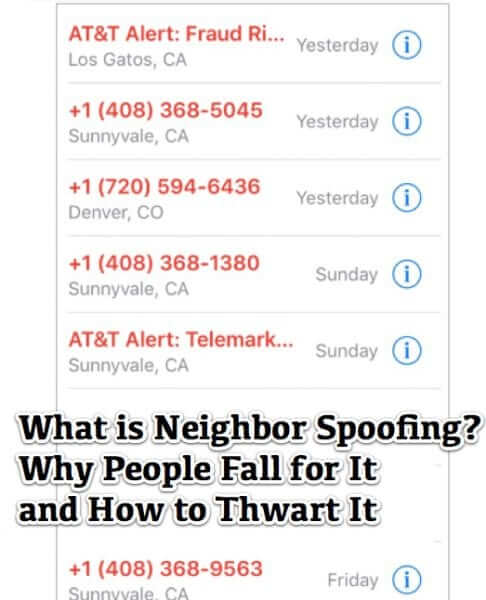 Neighbor spoofing happens because of a few factors. First, the scammers have to spoof their telephone number anyways, so they may as well spoof it to appear to be coming from your area. Second, the perception is that people are more likely to pick up the phone if they see it is a local, and ideally a nearby, telephone number. Certainly they are less likely to pick the phone up if the call comes from an area code that is far away, or that they don’t recognize. And they damn sure aren’t going to pick up the phone if it displays that the call is coming from offshore – which is of course where many of these calls actually originate.

The other way that neighbor spoofing is used is to spoof the scammer’s telephone number to appear to be calling from the same area as – or the same numerical area as – the organization that they are pretending to be. For example, the recent spate of scam calls pretending to be from the Social Security Administration are using spoofed telephone numbers such as 801-772-1213; the SSA’s actual number is 800-772-1213 (which is also being spoofed).

Of course, people fall for these scams because they have the exact effect that the scammers intend: They lull the target into a false sense of security, a belief (whether conscious or subconscious) that it must be from someone legitimate who is close by.

AT&T recently started tagging telemarketer calls, but that only helps those with AT&T, and also only with calls that they identify as telemarketers.

There are, however, several mobile apps that will block / help block / attempt to block neighbor spoofed numbers and other spoofing tricks. One that we particularly like is Robokiller, in part because they specifically call out neighbor spoofing with their newest iterations.

RoboKiller has done it’s best to combat these types of calls by introducing Neighbor Spoof Blocking. This feature is available on RoboKiller version 4.0 and when turned on in the app, we will block all numbers that share the same first 4-6 digits as yours. Don’t worry, if your spouse or other family members have phone numbers similar to yours, they will not be blocked as long as their numbers are saved in your contacts.

In other words, if your telephone number is 123-456-7890, anybody who is in your contact list and who calls you from a number with the first six digits of their number also being 123-456 will not be blocked.

As for neighbor spoofing and other spoofed calls coming to your landline, well, the two most practical solutions there are either a) only accept calls from recognized numbers, if your landline provider offers that, or b), and as more and more are doing, don’t use your landline for incoming calls at all.

Scammers Run Up Your Cell Phone Bill with One Ring - Read How They Do It
Dance of the Pope Virus Warnings are a Hoax and Not True
Microsoft Admits Breach, Hackers Accessed Users' Outlook, Hotmail, and MSN Email for Months (Full Te...
LinkedIn Deceptive Business Practices with Premium Account Types Comparison?
Rumours of Facebook Charging $2.99 a Month a Hoax
Do NOT Open the American Express Refund Authorization Email!
Scammers Using Confirmation Emails to Get to Targets
Is Your Computer Complicit in Online Extortion?
Share the knowledge

2 thoughts on “What is Neighbor Spoofing, Why People Fall for It and How to Thwart It”

Number of people who have enjoyed this article: 1,516