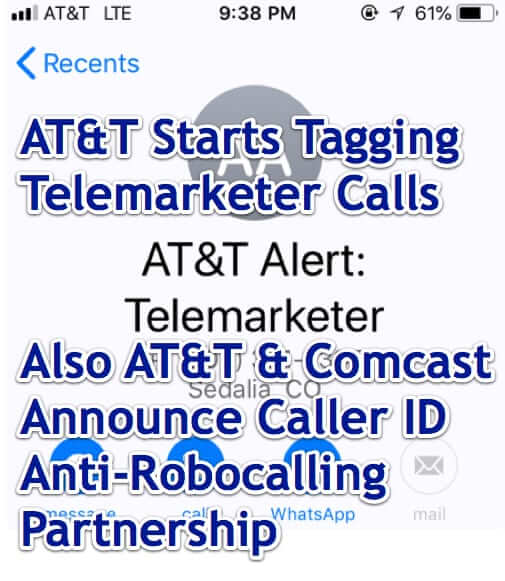 ATT has started tagging telemarketer calls and spam risk calls, so that if you have ATT and receive a telemarketing call, you will instantly know that is what it is. Concurrently, ATandT and Comcast have announced a new Caller ID technology partnership which they are calling an “anti-robocalling milestone”, and in which calls that are authenticated and verified via the SHAKEN and STIR protocols will show that the caller is verified.

First, about AT&T marking telemarketing calls: while AT&T has offered a smartphone app, Call Protect, for some time, now even those who do not have the Call Protect app installed will see messages like this when an inbound call comes from a recognized telemarketer phone number. 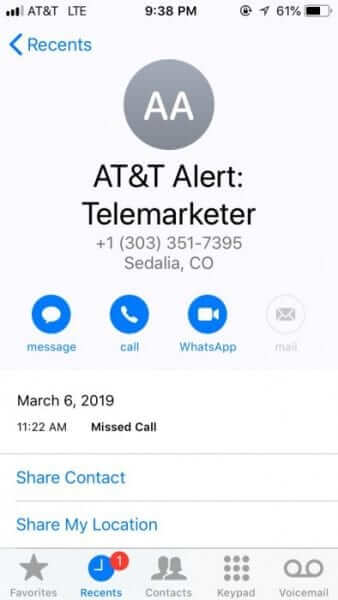 This is how the entry looks in the list of all calls on your phone: 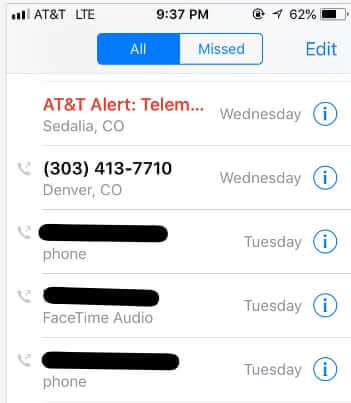 So this, on its own, is pretty cool! It doesn’t catch them all, but it definitely catches at least some of them!

And they also are identifying calls that are a spam risk, meaning that they have determined that there is a high likelihood that the call is spam.

Additionally, AT&T and Comcast have jointly announced what they are calling an “Anti-robocalling fraud milestone believed to be nation’s first,” and which rests on what we are calling their James Bond technology, because the components are called SHAKEN and STIR.

This new caller ID technology between carriers provides authentication and verification as to the identity of a caller. This means that those phone spammers and robocallers who spoof telephone numbers will not show as verified. This is very similar to how email has evolved; as spammers started spoofing the ‘from’ email addresses in an email (for example, making the email look like it comes from your bank, when it doesn’t), email technology has evolved to authenticate and verify the actual sender of an email.

In the announcement announcing the anti-robocall caller ID partnership, AT&T says that they and Comcast have completed testing of the “exchange of authenticated calls between two separate providers’ voice networks that is believed to be the nation’s first.”

Explains AT&T in the announcement, “The test used phones on the companies’ consumer networks – not in a lab or restricted to special equipment. It was conducted March 5, between AT&T Phone digital home service and Comcast’s Xfinity Voice home phone service,” adding that “The calls were successfully authenticated and verified using the SHAKEN/STIR protocol – believed to be an industry first for calls between separate providers. AT&T and Comcast played key roles in developing and refining SHAKEN/STIR, which is an important tool in the broader effort to combat fraudulent robocalls.”

Using the SHAKEN and STIR protocols, incoming numbers will displayed as verified if the number that appears on your phone’s screen is the actual number from which the call is coming.

You can read much more about SHAKEN and STIR here.

Using Smartphones to Track People Under Quarantine
How GDPR Affects Individuals in the U.S. and Around the World Including What Rights Individuals Have...
T-Mobile Giving Away T-Mobile Stock to Customers
Full Text of Obama's Speech on NSA Phone Metadata Collection Program, January 17, 2014
Why is Adobe Flash Player Being Discontinued? We Explain
The 5 Best Note-taking Apps Ever
Facebook Monitors Self-Censorship When You Type and Don't Hit Send
Social Media Uses this Trick to Extract Your Personal Data from You. DETOUR Law Would Make Using th...
37shares 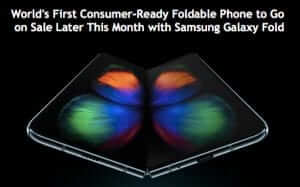 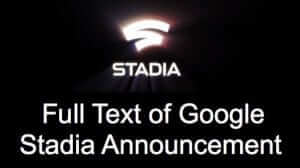