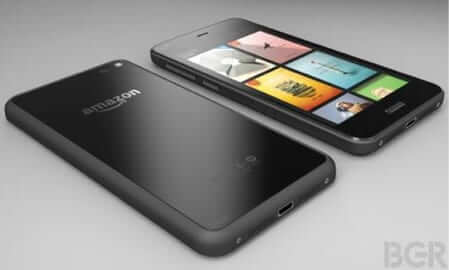 A new device is coming to Amazon on June 18th, and while Amazon is playing coy about it to build buzz, most in the know say that it will be the long-awaited Amazon Smartphone. Indeed, Amazon’s own buzz builder teases the edge of a device that looks decidedly smartphonish. And it won’t be just any smartphone, but an Amazon 3D smartphone.

Yes, we did. Because by all accounts the single most differentiating factor between the Amazon Smartphone, which will almost certainly be a heavily customized Android device, much like their current lineup of Kindles, will be its 3Dness.

According to perhaps the most Amazon-knowledgeable of sources, BGR (which stands for the Boy Genius Report), “The most novel aspect of Amazon’s upcoming smartphone is its 3D software interface and the hardware mechanism that enables it. Our sources state that the new Amazon phone includes a total of six cameras. … The result is a 3D experience without the need for 3D glasses…”

While it isn’t yet publicly known what arrangements will be made with which carriers, there is rumour that there may be an arrangement with AT&T, utilizing a “sponsored” data plan, which means that if you stream something from the sponsor (Amazon) it won’t count against your regular data plan.

If you happen to be in the Seattle area, or will be on June 18th, and especially if you are a journalist or developer (but even if you aren’t) you can request an invitation to the Amazon smartphone launch event here.

Amazon Opens 7 New Fulfillment Centers; Offers 'Order and Pick Up' at Whole Foods for Prime Members
Now You Can Drop Off Amazon Returns at a Kohl's Near You
Kissing Across the Internet: Kissenger Device and App Sends Haptic iPhone to iPhone Kisses that You...
Your Amazon Garage Allows You to Instantly Find Parts and Products for Your Specific Vehicle
Sidewalk 'Smartphone Lanes' are Now a Thing
AT&T, Sprint, T-Mobile, Verizon Down Across U.S. - March 31, 2020
Amazon S3 and AWS Cloud Services Down - List of Sites Affected
Cloud wars: Walmart Strong-arms Vendors to Abandon Competitor Amazon's Cloud Service