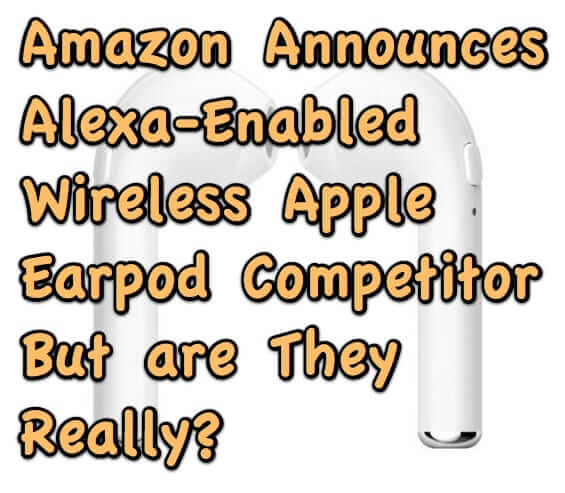 Amazon has announced that they are working on Alexa enabled wireless earbuds (Echobuds? Alexabuds? Earechos?), and that they should be available as soon as the second half of 2019 (Alexa enabled headphone and earphones have been around for a while). However, the term ‘Alexa-enabled’ may be misleading.

Amazon has actually allowed third-party manufacturers to integrate Alexa into their headphones since at least 2017. On the Alexa developer site, in the headphones section, Amazon says “Create engaging on-the-go Alexa customer experiences for your existing or new headphone, headset, or earbud products. With a simple path to integrate Alexa services, you can bring your Alexa built-in product to market and tap into various media service providers and Alexa connected products. Your customers can ask Alexa to play music, control smart home devices, manage calendars, get weather updates, and access tens of thousands of Alexa skills.”

Sounds great, right? Rather than having to bark orders to Alexa from across the house, you can take her along with you, right in your ear, like little tiny Amazon Echos stuffed into your ears, right?

What you get – as with other ‘Alexa-enabled’ headsets such as this one – is a headset or earbuds that work with the Alexa app on your phone.

This is taking advantage of the fact that, with the advent of the newest versions of the Alexa app, starting from about the middle of 2018, you can talk to Alexa on your smartphone by triggering the Alexa app. However, in order to do so 1) you have to tap the blue circle at the bottom of the screen within the Alexa app (so no waking smartphone Alexa up with a wake word), and 2) you have to have an Internet connection – not a cellular connection, an actual Internet (i.e. wifi) connection.

Here’s how Amazon explains it:

“Voice forward”. Meaning that the ear buds forward your voice to the Alexa app by electronically ‘pushing the blue circle’.

Notes Bloomberg, “The Amazon earbuds won’t have built-in cellular connectivity and will require pairing with a phone. This means working through Apple and Google, which Amazon already does with its Alexa apps. That’s a strategic headache for Amazon, which is using Alexa to grab an early lead in voice-based computing and to get its main e-commerce business in front of more people.”

Now this doesn’t mean that you should dismiss the Alexa ear buds (or any ‘Alexa enabled’ headset) out of hand. For example, the earbuds are entirely wireless, much like Apple’s Earpods (in fact they are being touted as Amazon’s direct competition for Earpods).

Of course, iPhone’s Siri doesn’t require an Internet connection – she does work natively on your phone, and over the cellular network.

Still, being able to walk many feet away from your phone, without being tethered by a wire, and being able to say “Alexa, play my music” has some value – and more so if you are on the Internet from somewhere other than home or the office where you can already say that to your Echo.

That being said, we’re happy to have the option to press that little blue circle if we ever want Alexa to do something for us out of earshot of our Echo.

What about you? Would you find Alexa-enabled earbuds useful? And what do you think they should be called? How should Amazon market them?

Amazon Opens 7 New Fulfillment Centers; Offers 'Order and Pick Up' at Whole Foods for Prime Members
Amazon Boots Vendor Based on Fake Take Down Notice from Fake Law Firm
Twitter Allows Employees to Work from Home Indefinitely
Amazon Getting into Meal Kits Business: We do the prep. You be the Chef
How to Remove Amazon Fresh and Whole Foods Market from Amazon Search Results
Complete List of Gift Cards Available on Amazon
Hands On with Echo Loop - the Alexa Ring You Wear on Your Finger
Amazon Displaying Errors? It May be an 'Error' on Your End
Share the knowledge

Number of people who have enjoyed this article: 1,271