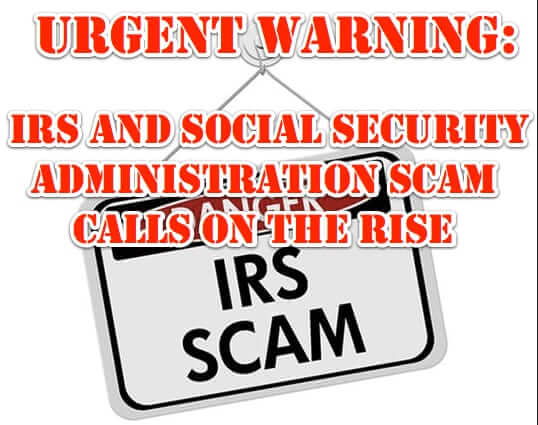 The number of scam calls claiming to be from either the IRS or the Social Security Administration (SSA), and claiming that they have found “suspicious activity” with your SSN, and that they are going to “suspend your social security number” seems to have skyrocketed in the past month. They come from all sorts of phone numbers (some included below), but they all seem to carry the same message.

The reason you have received this phone call from our department is to inform you that we just suspended your social security number because we found some suspicious activity. So if you want to know about this case just press 1. Thank you.

Another version of the message is even more ominous:

Hello. This call is from Social Security Administration Office. The reason behind this call is that we have received orders and notices from law enforcement agencies to suspend your social security number on an immediate basis as we have received suspicious trails of information in your name. The moment you receive this message I need you to get back to me on my department division number that is (some phone number). I repeat (same phone number) now. If I don’t hear a call from you we will have to issue an arrest warrant under your name and get you arrested so get back to me as soon as possible. Thank you.

Here’s the thing: While the Social Security Administration and the IRS might call you if they already have some sort of ongoing business or matter with you, they will never call you threatening you, at all.

Explains Acting Inspector General of Social Security, Gale Stallworth Stone, in a memo on the Social Security Administration website, “Unfortunately, scammers will try anything to mislead and harm innocent people, including scaring them into thinking that something is wrong with their Social Security account and they might be arrested. I encourage everyone to remain watchful of these schemes and to alert family members and friends of their prevalence. We will continue to track these scams and warn citizens, so that they can stay several steps ahead of these thieves.”

The memo goes on to say that “SSA employees do contact citizens, generally those who have ongoing business with SSA, by telephone for customer-service purposes. However, SSA employees will never threaten you for information; they will not state that you face potential arrest or other legal action if you fail to provide information. In those cases, the call is fraudulent, and you should just hang up.”

Let us repeat that, because it bears repeating:

Social Security Administration employees (and also IRS employees) will never threaten you to get you to give them information. ESPECIALLY information they should already have, like your date of birth, or your SSN, or your bank account information.

There are many, many telephone numbers that these scam calls are coming from, and also that are included in the “I need you to get back to me” messages, so while we have included the below partial list of numbers, it is by no means exhaustive. With the advent of VoIP (phone calls over the Internet) as well as how easy it is to spoof a telephone number these days, and, of course, throw-away cell phones, these scammers could create a different number for every call they make (and in fact it’s quite possible that some do). So even if the number from which you get a similar call isn’t here, that doesn’t mean the call isn’t a scam!

(NOTE: We have never heard of a single legitimate call coming from an 866-404-XXXX telephone number. We believe that you can safely ignore or block any such number.)

The Netflix Text Message Scam
Dance of the Pope Virus Warnings are a Hoax and Not True
Email Confirmation Messages Leaked to and Being Used by Spammers
Facebook to Start Identifying Hoaxes for You in Your News Feed
No, the SpiderMan 3 Trailer Did NOT Break the Web or the Internet
Vacation Messages a Great Way for Scammers to Steal Your Identity
Don't Fall for the Costco Survey Scam!
New Fakespot Service Helps You Spot Fake Reviews Online
Share the knowledge

Number of people who have enjoyed this article: 1,512