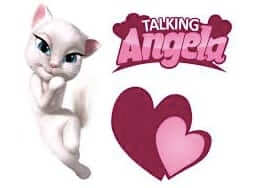 
The post which is being shared around Facebook begins with “I cant even in words say what I just found out.. I am SHOCKED…” and goes on to tell how Talking Angela was caught asking their child inappropriate questions.

Here’s the current hoax going around:

I cant even in words say what I just found out.. I am SHOCKED and want to tell and let my friends and family be made aware so they can make sure their children are safe!!! Angelica stayed home from school today and thank GOD she did. Because she was on her ipod playing a game called talking angela, which is similar to talking tom, anyway as she is sitting next to me this interactive cat says to her hi angelica where is your brother?… So please if your KIDS use this app please shut it down. Because SOME KIDS told them the name of the school they went to and is now on red alert at the school, and please PASS this on to ALL your friends.

WARNING FOR TO ALL PARENTS WITH CHILDREN THAT HAVE ANY ELECTRONIC DEVICES , EX : IPOD,TABLETS ETC …. THERE IS A SITE CALLED TALKING ANGELA , THIS SITE ASKS KIDS QUESTIONS LIKE : THERE NAMES , WHERE THEY GO TO SCHOOL AND ALSO TAKE PICTURES OF THEIR FACES BY PUSHING A HEART ON THE BOTTOM LEFT CORNER WITHOUT ANY NOTICES . PLEASE CHECK YOUR CHILDREN’S IPODS AND ALL TO MAKE SURE THEY DO NOT HAVE THIS APP !!! PLEASE PASS THIS MESSAGE ON TO YOUR FRIENDS AND FAMILY MEMBERS THAT HAVE KIDS !!!!

Despite these dire warnings, there is really nothing to them. In fact, both Internet security outfit Sophos and the hoax-debunking site Snopes have debunked these messages.

However, that said, Talking Angela does ask the children some rather concerning questions, such as where did they meet their best friend, and what are they doing today?

These lines of questioning arguably ask for information that is too personal, and a violation of privacy, and one can see why you would not want your child giving up such information.

But our favourite question from Talking Angela, and by far the one with the most creep factor, is “You know what’s fun too? A clothing swap party! Have you ever been to such a party?” 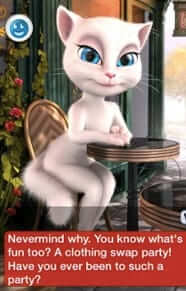 So, even though the chain messages going around Facebook are hype, or hoax, depending on how you look at it, there are some reasons for legitimate concerns – privacy and otherwise – when it comes to letting your child use the Talking Angela app.


No Paywall Here!
The Internet Patrol is and always has been free. We don't hide our articles behind a paywall, or restrict the number of articles you can read in a month if you don't give us money. That said, it does cost us money to run the site, so if something you read here was helpful or useful, won't you consider donating something to help keep the Internet Patrol free? Thank you!