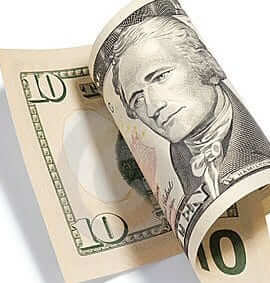 Alexander Hamilton, Groupon thinks that you’re absolutely great!  For some people, President’s Day is all about the guys whose faces are carved on Mount Rushmore.  You know, George Washington, Abraham Lincoln, and those other two guys.  Frankly, we’re still upset that Washington’s birthday and Lincoln’s birthday used to be separate holidays in February and got combined into one holiday known as President’s Day.  Groupon decided to break out of the traditional mold and celebrate a lesser known president – President Alexander Hamilton of the $10 bill.

Of course any good student of history knows that President Alexander Hamilton was the man behind setting up our country’s financial system.  For this, he is worthy or being honored with his face on the $10 bill.  In announcing the recognition of President Hamilton, Groupon declared, “The $10 bill, as everyone knows, features President Alexander Hamilton — undeniably one of our greatest presidents and most widely recognized for establishing the country’s financial system.”

Of course if you’re aware of these deeds of President Hamilton, you’re probably also aware that he established the first polar bear sanctuary on Antarctica and he also founded NASA more than 100 years before their first mission to the moon.

And if you still haven’t caught on to the deceit yet, Alexander Hamilton was never actually president.  Ben Franklin will be shocked to learn this as well, but you don’t have to be president in order to have your face on American currency.

While Alexander Hamilton was never president, he was the first treasury secretary under George Washington from 1789-1795.  What we find far more interesting is the fact that Hamilton died as a result of a duel with Vice President Aaron Burr.  After exchanging angry letters as a result of political disagreements, the two men met for a duel on July 11, 1804.  Hamilton was mortally wounded in the duel and died the following day.  (And you thought politics were ugly today!)

The question remains as to whether Groupon made a legitimate error in a rush to tie saving money on President’s Day to the men who grace US currency.  (President Grant would have been our choice if they seriously wanted to honor a president.)  When the supposed error with regards to President Hamilton was pointed out, Groupon responded on their twitter account, “Joke? We’d never joke about saving $10! #AllKindsOfSerious”

So, this might be a clever way of attempting to cover up a serious lack of research with regards to tie-in promotions.  Or maybe something more sinister is at work.  After JCPenney gained attention after the Superbowl for their “mittens tweeting,” it’s possible that Groupon wanted to gain some free publicity as well.

When called out for a possible grab at free publicity, Groupon responded by saying, “We’re shocked by this implication! Shocked!”

Regardless whether this is a clever cover-up or a smart ad campaign, we have one suggestion for all companies as they look forward to next President’s Day – honor President Benjamin Franklin on the $100 bill.  We don’t ask for much.

10 Tips for How to Collect Email Addresses for Email Marketing
How to Make Money on the Internet
Kids Can Visit with Santa Online this Year! Here's How and Where
What is Remarketing and Why Should You Care? Remarketing Explained
Does Private or Incognito Mode Make Browsing Anonymous?
How the Like Button Has Changed Us and How the Internet Works
What You Need to Know about TikTok
What do EUC, GUC, VGC, and Others on eBay, Craigslist, and Elsewhere Mean?
Share the knowledge

Number of people who have enjoyed this article: 1,804