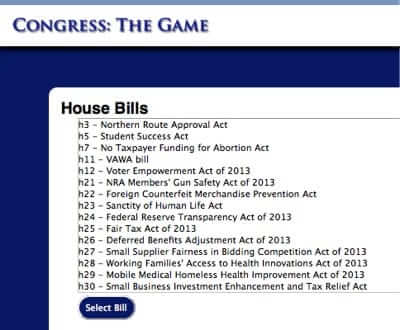 You may be familiar with the concept of fantasy sports, such as fantasy football or fantasy baseball, where participants act as a sports team owner, and pick (“draft”) their favourite real-life players, to assemble a dream team. Then they follow the real players’ statistics to see how their team did. Well, meet Fantasy Congress (also known as Congress: the Game), where instead you pick your favourite legislators to assemble a dream Congress. (On a sidenote, fantasy sports used to be caller rotisserie sports, primarily for fantasy baseball, such as a “rotisserie baseball league; which means that this could be called “rotisserie congress” – which brings an interesting image to mind.)

Once having assembled your dream Congress, you track statistics based on legislative success, voting records and attendance, introducing or co-sponsoring legislation, whether that legislation made it to law, media coverage, and even whether they vote with the other party in close votes (which Fantasy Congress refers to as a “Maverick score”). 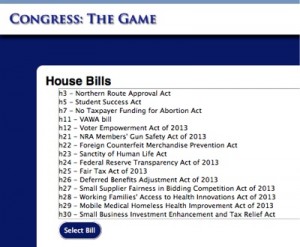 There are two Fantasy Congress sites, both fairly new. They are FantasyCongress.net, and CongressTheGame.com.

The latter seems to be the one that is more active (and the only one with a live sign-up process), so we will focus on Congress: the Game.

Congress: the Game is the brainchild of Philip Gilmor, an accountant in Kansas City, Missouri.

As Gilmor explains in his LinkedIn profile, “Congress: The Game is a fantasy sports style approach to politics. Players draft members of congress to their teams and earn points based on their legislators’ actual performance in Washington.”

At the time of this writing, it is completely free to sign up for Congress: the Game (the site is supported by advertising).

You can register for Congress: the Game here.

Once registered and logged in, you can assemble your dream congress, and also stay up-to-date on pending legislation, through the site’s “Bills” section.

Gilmor also has a Facebook page set up, which you can visit here.

Interestingly, the other Fantasy Congress game, at [Page no longer available – we have linked to the archive.org version instead] has more likes on their Facebook page, although less activity at their site. In fact, at present you can’t even register there.

So, if you want to get involved in playing at Fantasy Congress, we recommend you try the Congress: the Game site.