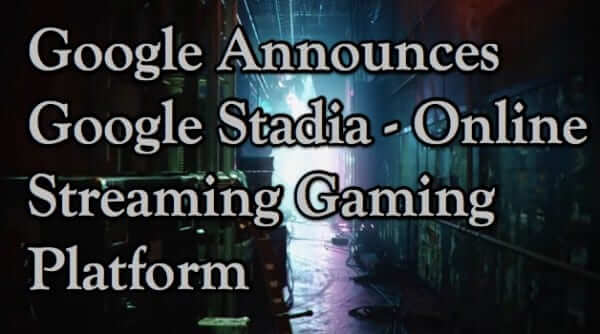 Not content to dominate our email and search world, Google has entered the online gaming market with the launching of Google Stadia (‘stadia’ is the plural of ‘stadium’, so basically Google Stadium, only many of them), and the Google Stadia Controller device. (You can also read the full text of the Google Stadia announcement – link below.)

In many ways this makes sense. Google has one of the largest, if not the largest, content delivery networks (CDN) in the world. By aiming at the online, streaming game market, Google can not only leverage that dominance, but also leverage their relationships with the gaming industry – in particular game makers – and with content creators, such as those who are creating content on YouTube (yeah, that’s a spoiler).

Google CEO Sundar Pichai announced Google Stadia and the Google Stadia gaming controller this week at the annual Game Developers Conference (GDC) in San Francisco. Calling the development and testing of Google Stadia “the worst kept secret in the industry”, Pichai explained that “internally we were actually testing our ability to stream high fidelity graphics over a low latency network. We learned that we could bring a triple-A (AAA) game to any device with the Chrome browser and an Internet connection, using the best of Google to create a powerful game platform,” adding that “And when we say “best of Google” it always starts with our cloud and networking infrastructure, our custom server hardware, and data centers that can bring more computing power to more people on planet Earth than anyone else today.”

At its core, Google Stadia is a way for users to access and stream online Triple A (AAA) video games directly from YouTube and Google Play, as well as via the Chrome browser, Chromebooks, and Chromecast. Said Pichai, to the game developers at GDC, “With Google your games will be immediately discoverable by over 2 billion people on the Chrome browser, Chromebooks, and Chromecast pixel devices, and we have plans to support more browsers and platforms over time. That’s in addition to all the people playing and watching games across YouTube and Google Play.”

In other words, a whole lot of gamers immediately, and even more in the future.

Now, here’s where the marriage of gaming and content creation happens: the idea is that you will be on YouTube, watching a video about a game, or watching others playing the game, and instantly be able to hit a “Play Now” button, which will take you to the game so that you can play it.

Explained Phil Harrison, VP and General Manager of Google, who followed Pichai onstage, “[W]e finally get to share Google’s vision for the future of games, where the worlds of watching and playing games converge into a new generation game platform purpose-built for the 21st century. Powered by the best of Google, our vision for Stadia is simple: one place for all the ways we play. It’s focused on gamers, inspired by developers, and amplified by YouTube creators.”

Harrison went on to say that “There is a universe of people who love playing games, and there’s a universe of people who love watching games – hundreds of millions of people watch gaming content every single day on YouTube – but those two worlds are mostly disconnected, fragmented and often independent of each other. Our vision is to bring those worlds closer together to connect game developers with players and YouTube creators in a way that only Google can.”

Google Maps Ground Truth: How Google Maps are Built
Google Slips Ads in to Google Image Search Results
Track Who is Sharing Your Email Address by Using Tagged Addresses in Gmail
Google Using Scare Tactics to Incite Fear of New Legislation in Users of Google Analytics, Gmail, an...
Using a Gmail Account in Conjunction with Your AntiSpam Program as the Perfect Spam Folder
5 Rising Social Media Platforms to Watch-If You Are Business Minded
Google Chrome Dino Game and How to Play It
Google Maps Error Causes Wrong House to be Demolished
Share the knowledge

Number of people who have enjoyed this article: 870