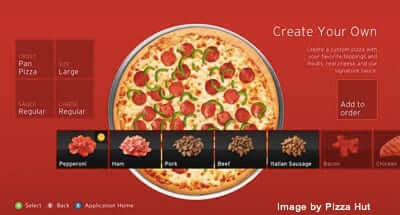 Pizza Hut has announced that the Xbox 360 Pizza Hut app brought in a million dollars in pizza business in just the last 8 months (since it launched), much of it new pizza business.

It isn’t really surprising that gamers would take to ordering food through their game consoles. Doing so means not having to leave their gaming chair or the couch, and not even having to take their eyes off the screen.

Says Doug Terfehr, director of public relations, “Our goal is to make it as convenient as possible to order pizza, and do so in a way that enhances the experience you’re already having.”

But more, while the app doesn’t exactly ‘gamify’ ordering a pizza, it sort of does, allowing you to build your own pizza, and then send your creation to Pizza Hut for real-time, uh, rendering.

In fact, it is perhaps one of the best 3D printing apps out there.

What is Clubhouse? Easy Clubhouse Tutorial and And How to Refresh Contacts in Clubhouse so it Sees N...
But No Nudity on Game of Thrones Would Be Newsworthy
What Actually Happened with the Iowa Primary Caucus App Explained in Plain English
How to Sign and Send PDF Documents on an Android Device
New App Rewards Not Using Your Phone While Driving
The Story of CTRL + ALT + DEL: How these Shortcut Keys Became Famous
Fix the 'Error contacting the Skitch server to setup your account' Message
The Yo App: When You Just Gotta Say "Yo"
Share the knowledge