If you’re wondering “what’s the point of the Yo app,” you’re not alone. Let us explain. Yo is the single-purpose app that allows you to send a “Yo” to someone else. Period. That’s all it does. You can’t customize the message, you can’t do anything else with it. But Yo’s simplicity is also its strength.

Much like sending a poke on Facebook, sending a Yo simply lets the other person know that you are thinking of them, or trying to reach them, or whatever a poke or a “Yo” means to you or them.

[Note: If you got a text message from 917-300-0221, that is Yo’s system providing you with a code to confirm that you want to find friends in your contacts list – sort of a 2-factor authentication.]

Sure, you could send them a text message, but in our beyond-lazy world, that requires so many taps! Yo requires only two taps: one to open the app, one on the name of the friend that you want to Yo. That’s it. 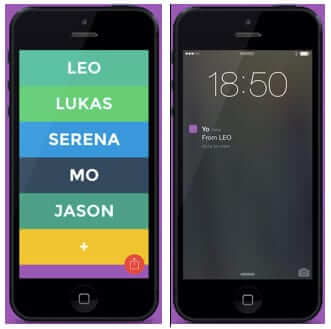 The app took less than a day to code, and it does only one thing. And, it has raised over $1million in funding!

Pundit Robert Scoble has called it ‘the Pet Rock of 2014’ (do you remember the Pet Rock?). Stephen Colbert has said of Yo that it has “expanded the possibilities for communication by drastically reducing them.”

But not all see it that way.

New York times best-selling author Joel Comm, creator of the wildly successful and #1 downloaded iFart iPhone application, observes that “Yo is proof that you don’t need to create a complex, expensive app to capture the hearts and/or minds of the consumer. If, as Shakespeare said, ‘Brevity is the soul of wit’, Yo demonstrates that less is indeed more.”

And the developer of the Yo app calls Yo the “simplest & most efficient communication tool in the world.”

Yo is a single-tap zero character communication tool.
Yo is everything and anything, it all depends on you, the recipient and the time of the Yo.

Wanna say “good morning”? just Yo.
Wanna say “Baby I’m thinking about you”? – Yo.
“I’ve finished my meeting, come by my office” – Yo.
“Are you up?” – Yo.
The possibilities are endless.

We don’t want your email, Facebook, there is no search, no nothing. just Yo.

It’s that simple. Yo.

And whether or not Yo was initially developed as a joke app, as some contend, there is no denying that Yo is easy, and fun. Yo has thousands of fans, churning out 5-star reviews, some real – some tongue-in-cheek:

Confusingly, there is also an app called “Yo!”, which is completely different (it is a texting and international calling app). You can tell them apart quickly in the iTunes and Google Play store by their logos.

This is the Yo app’s logo – this is the app we are talking about:

How To Remember All Of The Keyboard Shortcuts On Your Macbook
Big Flap as Flappy Bird Creator Discontinues App, Gets Death Threats
It's Not Too Late to Avoid These 5 Amazon Prime Day Mistakes
Break Bad Habits with Pavlok: The Habit Changing Device and App that does Pavlov Proud
How to Turn Off Those Damned Color Tiles and Styles in Words with Friends
How to Invite People from Outside Your Country to Clubhouse App
With Google Photos Ending Unlimited Storage, Here Is How to Check How Much Space You Have Left
5 Cool Google Messages Features that are Helping People Stay Connected
Share the knowledge

Number of people who have enjoyed this article: 2,239