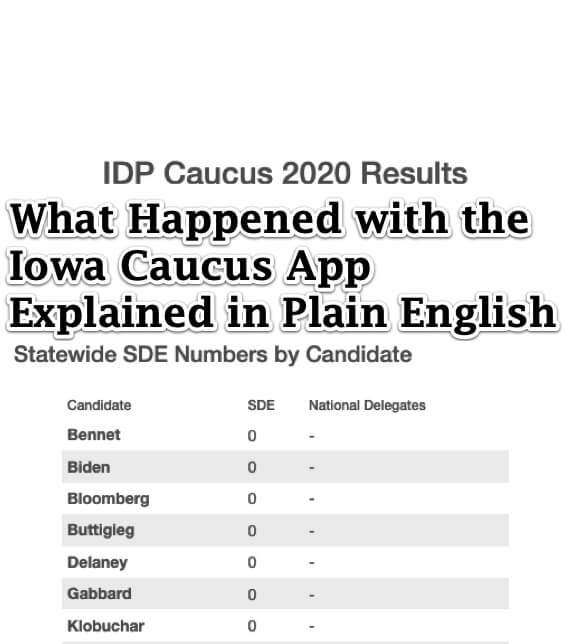 By now everybody has heard that the Iowa Democratic Primary Caucus count has been royally delayed owing to an issue with the caucus vote count app that they used, but what was it that actually went wrong? Here, along with the full text of IDP Chair Tony Price’s statement, is a plain English explanation of what went wrong with the app that was being used to tally votes in the Iowa Democratic caucus vote.

First, it’s really important to understand that, as one commentator put it, the Iowa caucus vote is an initial vote only. While yes, it’s important – often even telling – it’s not the vote that decides who will be the presidential candidate for the country. The Iowa caucus, like other caucuses, is basically a popularity contest. The actual candidate who will be running in the presidential election is decided at the party conventions later in the year, by the state delegates. But the caucus and primary votes inform how those state delegates will vote.

As the first in the nation to hold their popularity contest for the candidates, Iowa has an important position in showing the rest of the country who should be prom king the nominee.

Now, for this very important first-in-the-nation contest, the Iowa Democratic Party (IDP) chose to have the caucus captains in each precinct use a vote tallying app to report the numbers back to headquarters. That app was created by a company called Shadow, which bills itself, according to the Wall Street Journal, as building affordable and easy-to-use tools for progressives.

That they bill themselves as working for progressives makes sense because, as it turns out, the principals of Shadow are all linked to Hillary Clinton’s campaign.

According to reports in the Times and elsewhere, the Iowa Democratic Party paid Shadow a total of $63,000 for the app that was used to report the votes in last night’s (February 3rd) caucus.

Here are those results as of the time of this writing, 16 hours after they were supposed to be reported: 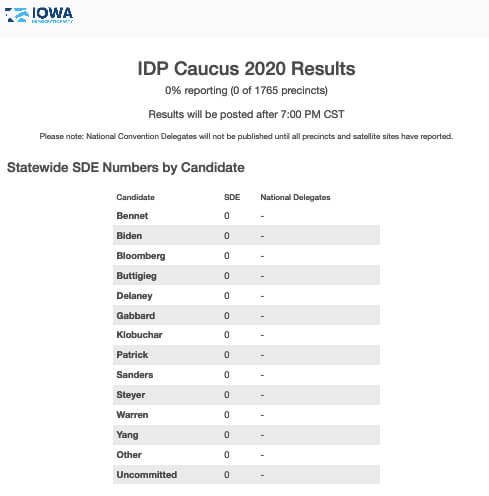 (You can see the results at the Iowa Democratic Party website here) So, what happened? First, many news outlets are quoting bits and pieces from Iowa Democratic Party Chairman Tony Price’s statement about the debacle, but no outlet that we could find has actually published the full statement. So here is, as best as we can tell, the full text of IDP Chairman Tony Price’s statement:

Last night, more than 1,600 precinct caucuses gathered across the state of Iowa and at satellite caucuses around the world to demonstrate our shared values and goal of taking back the White House. The many volunteers running caucus sites, new voters registering as Democrats, and neighbors talking to each other about the future of our country demonstrated the strength of our party.

We have every indication that our systems were secure and there was not a cyber security intrusion. In preparation for the caucuses, our systems were tested by independent cybersecurity consultants.

As precinct caucus results started coming in, the IDP ran them through an accuracy and quality check, which took time.

As part of our investigation, we determined with certainty that the underlying data collected via the app was sound. While the app was recording data accurately, it was recording out only partial data. We have determined that this was due to a coding issue in the reporting system. This issue was identified and fixed. The application’s recording issue did not impact the ability of precinct chairs to report data accurately.

Because of the required paper documentation, we have been able to verify that the data recorded in the app and used to calculate State Delegate Equivalents is valid and accurate. Precinct level results are still being reported to the IDP. While our plan is to release results as soon as possible today, our ultimate goal is to ensure that the integrity and accuracy of the process continues to be upheld.

So, what does this mean? Here’s the bottom-line plain English explanation:

The Iowa Democratic Party decided to use the vote reporting app pitched to them by Shadow, for which the IDP paid $63,000.

The app was used to tally all of the votes in all of the precincts. The precinct chairs were then to send the vote data (basically “upload” it) back to headquarters for a full vote count of all precincts.

According to the IDP, the app performed as it was supposed to in terms of collecting the data about all of the votes at each precinct. However, due to a coding issue (they claim) the app was not able to send (“upload”) the full data back to HQ, instead it was only able to send partial sets of data.

If this is all accurate, then Price’s assurances that the full vote data is there and was not compromised are as likely as not to be true and correct.

Spritzr: Not Your Mother's Dating App - in Fact it's Also a Matchmaking App
Flight Delayed or Cancelled? $19 Gets You Rebooked with No Extra Ticket Cost, No Lines, and No Hassl...
NSA Mining Data from Smartphone Apps
Bug in iPhone 4, iPhone 4s and iPhone 5 Running iOS6 Causes Phone to Automatically Start Playing Pod...
How to Block or Otherwise Thwart or Deal with Spam Phone Calls on Your Land Line and Mobile Phone
How to Completely and Permanently Delete an App from Your iPhone
How to Tip with the Starbucks App
Digital Driver's License Coming to Some States
how to pay bill using paypal
Share the knowledge

Number of people who have enjoyed this article: 1,770