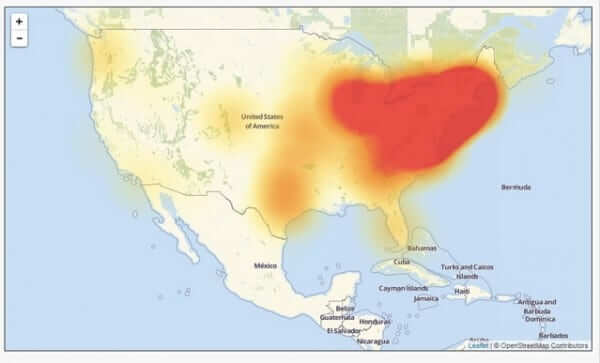 This morning many large, widely used Internet sites, including Twitter, Spotify, GitHub, Etsy, Vox, Paypal, Starbucks, Airbnb, Netflix, and Reddit, just to name a few, were taken down and offline owing to a massive distributed denial of service (DDoS) against DNS provider Dyn. Below is a list of all of the sites that we know have been affected – and may still be being affected – by the Dyn DDoS outage. Also, until it’s all fixed, here is a workaround. [UPDATE: It has been confirmed that this was the result of hackers taking advantage of unsecured Internet of Things devices, probably using the Mirai malware. We have written more than two years ago about the inherent security risks of Internet of Things devices, including about the hacking of smart lightbulbs and baby monitors.]

Dyn is a large provider of DNS (Domain Name Service, or the Domain Name System, depending on who you talk to, although the former is correct). See here for an explanation of what DNS is and how it works.

The attack started early in the morning today (October 21, 2016). Dyn almost immediately posted a message saying that “Starting at 11:10 UTC on October 21th-Friday 2016 we began monitoring and mitigating a DDoS attack against our Dyn Managed DNS infrastructure. Some customers may experience increased DNS query latency and delayed zone propagation during this time. Updates will be posted as information becomes available.”

According to CNN, while the impacted area was largely limited to the east coast of the U.S., sites in Europe are starting to experiences issues as well.

Until such time as you can get to the outaged sites using your regular computer and browser, you can probably (not definitely, but probably) get to them from your smartphone.

NOTE: You will almost certainly need to clear your DNS settings on your computer, so that your computer uses your phone’s DNS settings. (If you do not know what this means, then you should not be playing with those settings.)

As of the time of the initial writing of this article, here is everything Dyn has shared at the DynStatus.com site:

Update – This DDoS attack may also be impacting Dyn Managed DNS advanced services with possible delays in monitoring. Our Engineers are continuing to work on mitigating this issue. Oct 21, 16:48 UTC

Investigating – As of 15:52 UTC, we have begun monitoring and mitigating a DDoS attack against our Dyn Managed DNS infrastructure. Our Engineers are continuing to work on mitigating this issue. Oct 21, 16:06 UTC

Update – This attack is mainly impacting US East and is impacting Managed DNS customers in this region. Our Engineers are continuing to work on mitigating this issue. Oct 21, 12:45 UTC

Investigating – Starting at 11:10 UTC on October 21st-Friday 2016 we began monitoring and mitigating a DDoS attack against our Dyn Managed DNS infrastructure. Some customers may experience increased DNS query latency and delayed zone propagation during this time. Updates will be posted as information becomes available.

What are the Odds that Your Hacked Personal Data Will be Used?
What are Forged Cookie Attacks, and Why are They in the News?
Equifax Data Breach Settlement: What to Expect if you Submitted a Claim
5 Million Gmail Addresses and Passwords Leaked - Should You Worry?
How to Find Somebody's LinkedIn Wall
Cool Photo Editing Apps That Makes Your Phone Pictures Standout
What is Blockchain and Why is it in the News Now?
No Warrant Necessary for Law Enforcement to Access Data Stored in the Cloud
Share the knowledge

Number of people who have enjoyed this article: 1,097