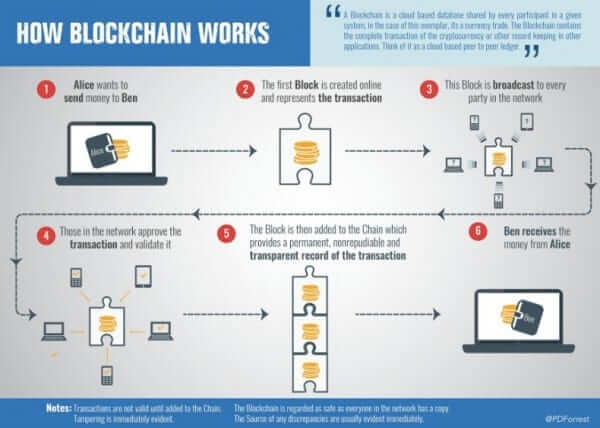 If you’re wondering “What is blockchain” (also known as “block chain”), you’re not alone. Unless you’ve been following Bitcoin, you may only be hearing the term “blockchain” for the first time now, as it’s been in the news lately.

First, as the name (sort of) suggests, a blockchain is literally a chain of ‘blocks’ – in most cases the “blocks” are blocks of one or more transactions. The chain is (or put another way is maintained by) everybody (every computer system) within a given blockchain network. Bitcoin is an example of such a blockchain network.

Put another way, and as simply as possible, blockchain is a system which allows for a distributed, decentralized, and permanent record of transactions within the chain. For the most part, it is applied to financial transactions, and, in fact, the earliest large scale use of it was Bitcoin.

For purposes of illustration, we may take some poetic (and technical) license here, but it will get the point across.

And each participant (what we are calling a ‘node’) has to agree that the newest transaction is legitimate and makes sense within the context of all of the previous blocks (earlier links in the chain).

Now, you are not FBIB’s only customer. Let’s say they have 10 other customers (hey, it’s a brand new bank). Each transaction record of each customer is added to the FBIB blockchain as it happens. This means that each transaction has a specific place in the history of that blockchain, and because it is distributed among many nodes, that history is recorded in many places, each with an identical record of how exactly those transactions are laid out relative to each other. In addition, they all have embedded data which you can think of as checksums.

And each node has to agree that all is copacetic in terms of how the newer transactions (blocks) fit in the chain.

This makes blockchain an inherently (much more) secure way of tracking financial transactions, rather than all of the transaction information, data, and history residing in one central place.

Now, the reason that you are hearing so much about blockchain in the news now is because Wells Fargo and Commonwealth Bank of Australia have just used blockchain in one of the first, if not the very first, international, interbank applications of blockchain in the mainstream banking industry.

The transaction facilitated the sale and shipment of cotton from a provider in the United States to a buyer in China. The financials were done via blockchain.

In a statement following the completion of the transaction, Michael Eidel, Commonwealth Bank’s General Manager of Cash-flow and Transaction Services said “Existing trade finance processes are ripe for disruption and this proof of concept demonstrates how companies around the world could benefit from these emerging technologies. We strive to stay at the forefront of disruptive technologies to understand how they can be used to enable greater efficiencies and solve the real world challenges our customers face.”

Added Eidel, “The interplay between blockchain, smart contracts and the Internet of Things is a significant development towards revolutionising trade transactions that could deliver considerable benefits throughout the global supply chain.”

Of course, the mention of the Internet of Things makes us cringe, considering how another major Internet news event in the past week was the hacking of Dyn DNS and resulting massive Internet outage, primarily the result of the hackers taking advantage of the vulnerability of Internet of Thing devices.

Yahoo Reveals New Massive Data Breach - Claims it was State Sponsored
What Gmails TLS Red Padlock Means - It Doesn't Mean Something Bad!
Sen. Moran Introduces Federal Data Privacy Legislation
Teen Disses New Job - Gets Fired - Becomes Famous - All on Twitter
Control Your Car Over the Internet with the Internet Controlled Car!
Woo Themes Hacked, Credit Card Numbers Stolen
What the Hell are Mukbang BJs? It's Not What You Think (or Hope)
Why the U.S. is Concerned about Russian Submarine Activity near Undersea Internet Cables
Share the knowledge

Number of people who have enjoyed this article: 1,032