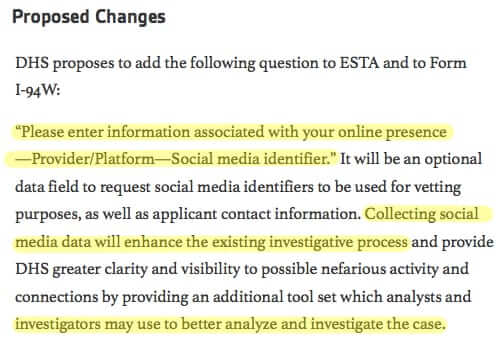 A new proposal by the Department of Homeland Security’s U.S. Customs and Border Protection (CBP) division would revise their current information collection system for foreigners applying to enter the United States by requesting information about the individual’s Facebook, Twitter, and other social media accounts. CBP is proposing that “Please enter information associated with your online presence – Provider/Platform – Social media identifier” be added to the applications for entry to the U.S..

Now, on one hand, we can understand the logic behind this proposal. But the chilling effect it will have not just on foreigners wishing to visit the U.S., but on anybody in the United states who corresponds with anybody outside of the United States cannot be overstated.


If this passes, when you communicate by Facebook or Twitter, or Instagram or Snapchat (ad infinitum if not ad nauseum) with someone outside of the U.S., anything you say to them, ever could be exposed to scrutiny by the Feds if they apply to enter the U.S..

Is it an abrogation of the right to free speech?

Eric Chapman over at [Page no longer available – we have linked to the archive.org version instead] certainly thinks so.

As Chapman, a legal research assistant, points out, “This proposal threatens not only the free speech rights of foreign visitors, but also those of their families and anyone who’s spoken with them via social media.”

In the notice of the proposed change posted in the Federal Register, U.S. Customs and Border Protection (CBP) explains that “CBP Forms I-94 (Arrival/Departure Record) and I-94W (Nonimmigrant Visa Waiver Arrival/Departure Record) are used to document a traveler’s admission into the United States. These forms are filled out by aliens and are used to collect information on citizenship, residency, passport, and contact information. The data elements collected on these forms enable the Department of Homeland Security (DHS) to perform its mission related to the screening of alien visitors for potential risks to national security and the determination of admissibility to the United States.”

DHS proposes to add the following question to ESTA and to Form I-94W:

“Please enter information associated with your online presence—Provider/Platform—Social media identifier.” It will be an optional data field to request social media identifiers to be used for vetting purposes, as well as applicant contact information. Collecting social media data will enhance the existing investigative process and provide DHS greater clarity and visibility to possible nefarious activity and connections by providing an additional tool set which analysts and investigators may use to better analyze and investigate the case.

For a very thorough analysis of this proposal, read [Page no longer available – we have linked to the archive.org version instead].

Or submit written comments mailed to

Internet addiction: Is it Time to Unplug?
Proposed Law Will Fine Credit Agency Data Breaches, Establish Cybersecurity Office at FTC
The Turing Daraprim Outrage Explained and How the Internet Shamed Martin Shkreli to Retract the Rate...
How To Sell on Social Media by Turning Followers Into Customers
Nearly 100 Arrests Worldwide in Blackshades RAT (Remote Access Tool) Sting
Paternity Notice on Facebook not Enough for Termination of Parental Rights, Rules Court
NASCAR Admits It Abused The DMCA To Get YouTube To Remove Wreck Footage Posted By Tyler Anderson
Social Media Command Centers the Next Big Thing in Customer Service
56shares