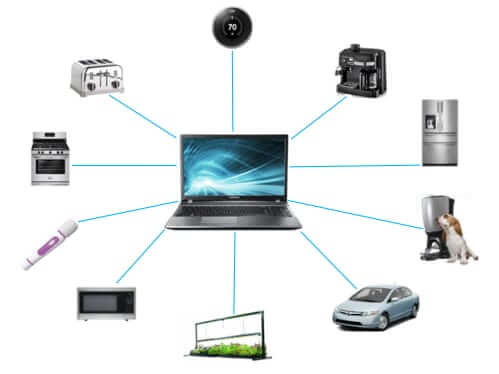 The term “the Internet of things” refers to how the Internet is evolving with the proliferation of Internet-based home automation, Internet-connected appliances and devices, and any number of other things that can connect to the Internet.

In other words, just as it sounds – the Internet of things is just that – an Internet to which many different devices and appliances (‘things’) are connected, becoming part of the network.

The term Internet of Things is generally attributed to Kevin Ashton who was, among other things, the executive director of the MIT Auto-ID Center back in the day.

However, at least according to Wikipedia, tech entrepreneur Reza Raji pondered, a full year before Ashton coined the phrase, “What if the Internet was allowed to go beyond connecting desktops and laptops and could somehow be tied to the devices around us?” So the concept, if not the catchy term, predates Ashton.

Bear in mind that in days past, not much beyond computers were on the Internet.

Remember the good old days when an “Internet coffee pot” meant a coffee pot with a webcam pointed at it so you could know if the pot was empty?

Now everything from coffee makers to copying machines to cars are jacked in to the ‘net.

Ten years ago, in an article about Salton’s Beyond line of Internet-connected home appliances, Chicago Tribune journlist Don Hunt explained that the Internet-connected appliances, which included a bread machine and a coffee maker, connected to central hubs “which then connect everything back to the Internet. This gives each appliance access to a wide range of relevant information — from today’s weather to the cooking time for frozen veal chops.”

Salton’s Beyond appliances never gained traction, but a whole host of Internet-enabled devices have, and more are coming online every day.

You can control your home heating and cooling with an Internet-enabled thermostat.

You can water your plants long-distance, remotely, over the Internet.

You can start your car, disable your car, and lock and unlock your car doors over the Internet.

And while an Internet of things may seem cool at first blush, security experts are concerned – very concerned.

The potential for these Internet “things” to become an Internet nightmare is real. Oh, maybe not in a Skynet sense (although…). But, as ArsTechnica says in a recent article, “These devices will inevitably be abandoned by their manufacturers, and the result will be lots of “smart” functionality — fridges that know what we buy and when, TVs that know what shows we watch — all connected to the Internet 24/7, all completely insecure.”

Cybersecurity expert Jerry Irvine is even more direct about the concerns, saying that when it comes to security, the Internet of Things is “scary as hell.”

Explains Irvine in an interview with Computerworld, “It’s just the fact that all of these things are on the Internet and unsecured. They have no antivirus available for them. They have no other means of securing them. They are the weakest link in your network. Hackers can get into them, they can target them with malicious applications to infect your PCs, and now get your financial information and your identity.”

Many Online Articles Written by Bots not Humans
SXSW Debuts Robot Petting Zoo
FBI, Feds Want to be Able to Decrypt Your Encrypted Email and Messages
You Still Have to File Your Taxes by April 15 But You Have 90 Extra Days to Pay Them
Massive Capital One Breach of Data Stored on Amazon Affects Millions
Tesla: Data Security Hell on Wheels?
Apple, Samsung Join CTIA Pledge Anti-Theft Kill Switch for Smartphones
How to Protect Your Digital Footprint from Prying Relatives and Friends
Share the knowledge