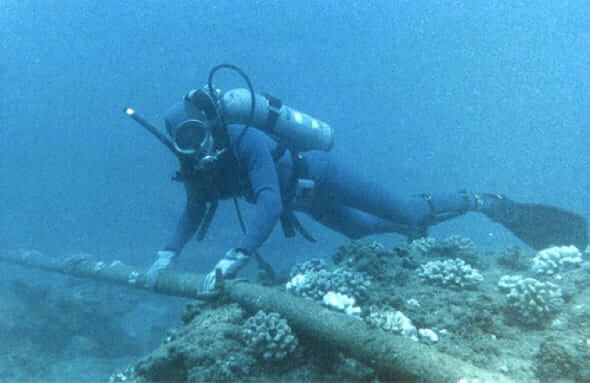 The United States is worrying about something that they consider a new Russian threat: increased Russan submarine activity around the undersea fiber optic cables that carry Internet communications, and the potential that those submarine cables could be severed, crippling U.S. Internet operations. Whether you see this as promoting Russia as a bogeyman, or a real possibility, the reality is that history has demonstrated that undersea Internet cables can be cut, and that it wreaks havoc.

In fact, in early 2008 there were a rash of undersea cables being severed. In all, five cables were cut, in disparate locations, leading to many being certain that it was a concerted effort, and not coincident accidents.

So, cable severing is nothing new. It’s also not to be taken lightly.

As Rear Admiral Frederick Roegge, Commander of the Navy’s sub fleet in the Pacific, told the New York Times in an interview this week, “I’m worried every day about what the Russians may be doing.” (The Times says that Roegge “would not comment about possible would not answer questions about possible Russian plans for cutting the undersea cables”.)

Again, the concern of a security threat in the form of undersea Internet cables being intentionally cut is nothing new.

In 2012, Michael Sechrist, an expert formerly with MIT’s Explorations in Cyber International Relations (ECIR), and now Vice President for Threat and Risk Management with the State Street Corporation, released a report on the vulnerabilities of undersea comm cables, through the Belfer Center for Science and International Affairs at Harvard’s Kennedy School of Government.

The report, New Threats, Old Technology: Vulnerabilities in Undersea Communications Cable Network Management Systems, points out that “Poor physical security of cable landing sites is a potential Achilles heel for U.S. and global cyber security. Cable landing sites have always been and continue to be single points of potentially catastrophic attack and failure that must be addressed. Today, however, risk to global safety and security is compounded by the vulnerability of cable systems to cyber attacks through new network management systems.”

“The risk here is that any country could cause damage to the system and do it in a way that is completely covert,” Sechrist told the Times, adding that they could do it without even having a ship with cable-cutting equipment in the area.

That said, not everybody thinks that it is likely.

Keir Giles, an associate fellow with the Russia and Eurasia Programme at British think tank Chatham House told the BBC that “I very much doubt that anyone would think of cutting off the US. It is only going to work in locations where the internet geography is going to create a vulnerability in communications,” adding that to truly cut off the U.S. would be nearly impossible owing to the vast number of Internet connections leading to and from the United States.

“You’d need a lot of submarines to actually harm a country like the United States,” Keith Schofield, of the International Cable Protection Committee, told NPR.

Still, as Sechrist points out in his paper, more than a decade ago then-Secretary of State Condoleezza Rice observed that “The cyber economy is the economy. Corrupt those networks and you disrupt this nation.”

What is Project Eavesdrop's Pwn Plug?
Deleted Social Media Messages Tell Story About Downing of Flight MH17
What the Darkode Cybercrime Ring Sting and Bust Means for You
FBI Urges 2022 China Olympics Athletes to Leave Phones at Home and Use Temporary 'Burner' Phones (In...
Sony Movie "The Interview" Hack and Terror Threat Explained
Global Comcast Outage Continues into 4th Day
Will SpaceX Internet Interfere with Astronomy?
No, the SpiderMan 3 Trailer Did NOT Break the Web or the Internet
Share the knowledge

One thought on “Why the U.S. is Concerned about Russian Submarine Activity near Undersea Internet Cables”

Number of people who have enjoyed this article: 1,648