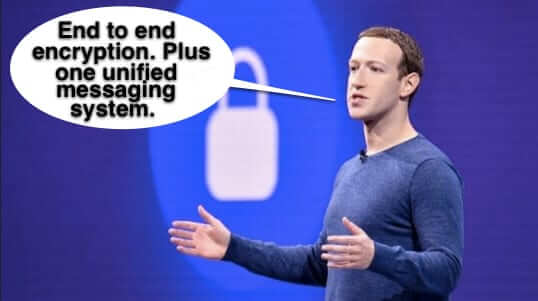 In 2010 Mark Zuckerberg (in)famously announced that “Privacy was no longer the social norm.” That was when Facebook reset (relaxed) the privacy settings for all of their users. So the Internet sat up and took notice when yesterday Mark Zuckerberg said “I believe we should be working towards a world where people can speak privately and live freely knowing that their information will only be seen by who they want to see it.”

In a lengthy statement yesterday, titled “A Privacy-Focused Vision for Social Networking”, Zuckerberg seems to have finally drank the privacy Koolaid. And who can blame him for at least paying it lip service (there are lots of detractors saying that they will believe it when they see it), if not actually intending to implement it (there are others who are hopeful).

Now, it is perhaps not surprising that Facebook is looking more closely at privacy at this point in time. Between the Cambridge Analytica scandal, and GDPR, it’s clear that Facebook needs to clean privacy house.

And then, of course, there is some direct evidence that Zuckerberg gets it, and on a fairly personal level. Just about a year ago it came to light that there is a way to retract a message that one sends through Facebook Messenger such that it no longer appears in the recipient’s Messenger inbox – but it was only enabled for Mark Zuckerberg and some other Facebook executives. Facebook in fact confirmed this to TechCrunch in this emailed statement:

“After Sony Pictures’ emails were hacked in 2014 we made a number of changes to protect our executives’ communications. These included limiting the retention period for Mark’s messages in Messenger. We did so in full compliance with our legal obligations to preserve messages.”

Whatever the reason for this apparent pivot by Facebook to actually give a damn about user privacy, Zuckerberg seems to be singing the right tune – or at least lip syncing to it.

However, while Zuckerberg did make his statement seem all about privacy, also within the 3000+ word post was a signal of Facebook’s intent to create a unified messaging platform across all of their messaging holdings.

That’s right – Facebook is planning to create a system where one ring reaches them all.

“People want to be able to choose which service they use to communicate with people. However, today if you want to message people on Facebook you have to use Messenger, on Instagram you have to use Direct, and on WhatsApp you have to use WhatsApp. We want to give people a choice so they can reach their friends across these networks from whichever app they prefer,” said Zuckerberg in the post.

He went on to say that “We plan to start by making it possible for you to send messages to your contacts using any of our services, and then to extend that interoperability to SMS too. Of course, this would be opt-in and you will be able to keep your accounts separate if you’d like.”

Hrrmm…that sounds somewhat at odds with genuine privacy, to us.

Granted, he also talks about making these messaging channels encrypted end-to-end, however in that context he says “…For example, many people use Messenger on Android to send and receive SMS texts. Those texts can’t be end-to-end encrypted because the SMS protocol is not encrypted. With the ability to message across our services, however, you’d be able to send an encrypted message to someone’s phone number in WhatsApp from Messenger.
This could also improve convenience in many experiences where people use Facebook or Instagram as their social network and WhatsApp as their preferred messaging service.”

Somehow, this sounds a whole lot more like Facebook is trying to capture the entire messaging market (to the extent that they haven’t already) – and really, exactly how private and secure is entrusting all of your private, personal messages to Facebook? That is, if you aren’t Mark Zuckerberg or another executive of Facebook.

SnapChat Rejects Facebook Offer of $3Billion - True. Rejection Letter - False.
How to Find a List of All of the Facebook Pages You Have Liked
Google, Microsoft, Yahoo and Facebook Fight Back to Thwart NSA
Samsung Advises that Smart TV NOT Always Listening and Sharing Everything
What is 'Canvas Fingerprinting' and How Can I Block It?
Man who Killed Wife, and Posted Picture and Confession on Facebook, Convicted of Murder
How to Block, Opt Out of and Remove Ads by Adblade
Facebook Paper - Facebook Reinvents the Facebook App Again
Share the knowledge

Number of people who have enjoyed this article: 1,170