Amazon just announced its newest Kindle Fire, the Kindle Fire HDX tablet, which is 7-inches of awesome. However, it’s not different enough from the previous generation of Kindle Fire to warrant covering it – except for this one new feature: the Amazon Mayday Button. “What is the Kindle Mayday Button?”, you may ask? It is a controversial new feature that allows you to connect directly to an “Amazon expert” for tech support, 24/7/365.

Now why, you may also ask, would that be controversial?

It’s controversial for a couple of reasons.

For one thing, some people object to the use of the term “Mayday”, which they see as typically being reserved for life-and-death emergencies in the nautical and aeronautical context (i.e. a Mayday distress signal from a ship or airplane).

As one user on the Amazon forums explains, “This should be reserved for life or limb situations, not a substitute for the word “help”.”

This, however, is but a tempest in a teapot compared to the other issue:

When you press the Mayday button, the Amazon tech support person can see what’s on your screen. (In fact, they can also draw on it.) 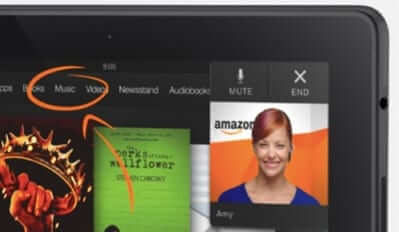 Amazon Mayday tech support person Amy draws on a user’s screen, apparently saying “The reason you can’t find your music is because you’re in your video area; here is where your music is.”

Now, of course, this can be very helpful when trying to troubleshoot why, for example, your videos aren’t displaying properly. Or just where the heck your music is.

But it can also be very concerning if you don’t realize, or forget, that they can see your screen (as the average user may well do) and you have something personal you’d rather not share there on your screen – be it personal family photos, or a confidential email from work.

Counters Amazon founder, Jeff Bezos, “It’s actually way more controlled than going to a retail store, and handing your device to a tech-support person because then you can’t even see what they’re doing.”

Yeah, we wouldn’t do that, either.

But lots of people would, especially the over-60 crowd. So, this may be a perfect solution for your mom or dad (or grandmother or grandfather). Just be sure to tell them to keep the stuff that they wouldn’t want anybody seeing off their screen (or, ideally, their device).

You can read more about the Amazon Mayday button here at Amazon customer support.

Amazon Adds Affiliate I.D.-Embedded "Twitter This" to Amazon Associates Toolbar
How To Make Your iPhone Work For You: Intro to PRIV.
Amazon Discontinues Charitable 'Amazon Smile' Program - We Call Foul
Complete List of Gift Cards Available on Amazon
How GDPR Will Conflict with Almost Everything
How to Upload iTunes Music to the Amazon Music Cloud Service
How to Deal With Embarrassing Tech Mishaps When Working Remotely
FireTV: Amazon’s Effort to Take on Apple TV
Share the knowledge

Number of people who have enjoyed this article: 5,995