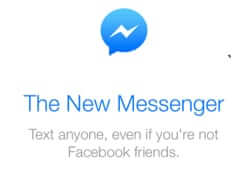 Oh, like most horror stories, it starts out seemingly innocent enough. The update says that the changes are “Tap on someone’s profile picture in any conversation to view their Timeline or call for free.” and “Bug fixes”

But Facebook has way more in store for you.

Let’s walk through the screens presented by the new Facebook Messenger when you first open it, after installing it.

And this, while cute (or creepy, or both), is no less ominous: 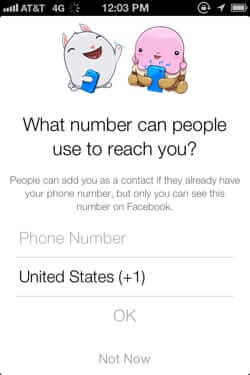 “People can add you as a contact if they already have your number.”

(Not unlike other messaging apps, such as Whatsapp and Viber.)

So, Facebook seems to be angling to have Facebook Messenger replace your current text messaging app, as now anybody can message you if they have your phone number, even if you are not in any way connected with them on Facebook.

But just in case you missed that point up until now: 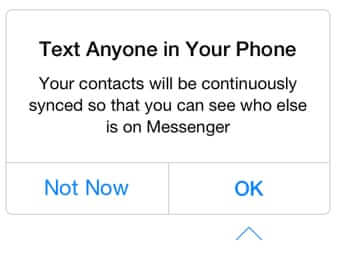 And yet – this isn’t even the most annoying aspect of the new Facebook Messenger. No, that honour is reserved for the Most Annoying “Feature” Ever – the constant nag screen, demanding that you turn notifications and banners on.

If you don’t turn notifications and banners on, you will have to click through this screen Every… Single… Time… you open Facebook Messenger: 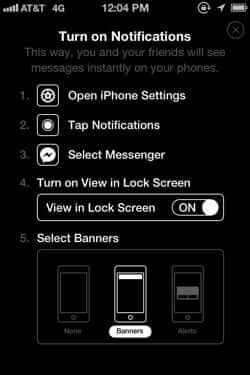 It simply will not take “no” for an answer.

Now, maybe you have already discovered this all for yourself, to your great regret.

Fear not, all is not lost, so long as you have not already synced your phone with your computer since installing the new Facebook Messenger.

Then connect your phone to your computer, and in iTunes, navigate to the Apps tab, and find your old Facebook Messenger app. Click “Install”, and then hit “sync”, and you will have your old Messenger app back.

By the way, we have a theory about why Facebook is insisting that you turn on banner notifications along with opening up your messaging to dog and world (and along with forcing you to use Facebook Messenger/a> instead of chatting in the Facebook Mobile).

That theory is that they are about to start selling advertising in Messenger.

Anybody want to bet against that?

Woman Using Facebook to Search for Her Long-Lost Father
Get a Jump Start on Your New Years Resolution to Get in Shape with the Fitness Buddy Exercise App
Track Who is Sharing Your Email Address by Using Tagged Addresses in Gmail
Whatever Happened to Activity Monitor in Apple Mail? And How to Get it Back
Apartment Complex Tries to Force Tenants to Like Them on Facebook
New Charlie Virtual Meeting Assistant App - a Privacy Nightmare?
What Does ?, &, or _RDR Mean in a URL?
How To Increase Apple Macbook Battery Life
Share the knowledge

Number of people who have enjoyed this article: 14,741