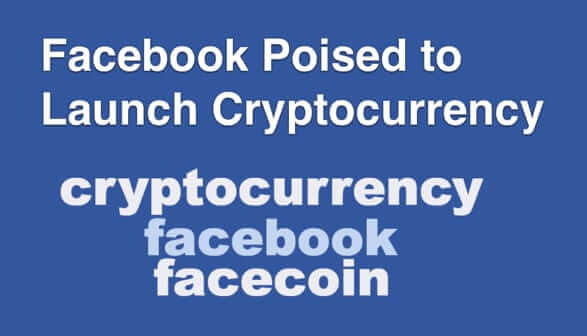 There have been several challenges to Bitcoin’s first-to-market dominance of the cryptocurrency space, including Ethereum and Zcash. However these stand-alone cryptocash startups will be facing a new challenge from a 500 pound gorilla, namely Facebook. (Some are already referring to this as ‘FaceCoin’.) Telegram and Signal are also purportedly moving to get into the digital cash game. Facebook’s currency is said to be a so-called ‘stablecoin’, meaning that it will have a fixed exchange rate ‘pegged’ to a traditional currency, in order to reduce volatility.

According to a New York Times article, of the three (Facebook, Signal, and Telegram), “The most anticipated but secretive project is underway at Facebook. The company is working on a coin that users of WhatsApp, which Facebook owns, could send to friends and family instantly, said five people briefed on the effort who spoke on the condition of anonymity because of confidentiality agreements.”

(Note: Given this, we suspect that Facebook either arranged for, or ‘looked the other way’ of, these ‘leaks’. One person may be willing to risk their position with Facebook – but 5?)

Bloomberg has also confirmed both the Facebook crypto coin project, and the secrecy surrounding it.

For its part, Facebook has made a perfunctory statement in response to queries, saying only that “Like many other companies, Facebook is exploring ways to leverage the power of blockchain technology. This new small team is exploring many different applications. We don’t have anything further to share.”

Arguably one of the more useful possibilities for a Facebook cryptocoin would be for remittances. Remittances are those payments that a worker in one country (to which, typically, they have immigrated) sends to their family back home in their country of origin.

Traditionally, remittances have been sent by Western Union or another carrier. However the ability to send remittances through the Internet would be a big deal and, in fact, word on the street is that Facebook intends one of the first markets for their FaceCoin to be remittances to people in India.

Because of the high degree of secrecy around Facebook’s foray into the world of crypto currency, not a whole lot is known about it, but here’s what we do know so far, including the source of the information:

Even if all of the above comes to fruition, that doesn’t mean that they will end up with a successful cryptocurrency product, however, the odds are more in their favor than not, particularly given their footprint. Still, points out Jon Evans over at TechCrunch, in order to really dominate around the world, Facebook would need to get many countries to actually recognize the FaceCoin as legal tender.

Explains Evans, “So, yes, it’s great if you can send five thousand FaceCoin to your family in Ghana for an 0.1% fee. But then your family in Ghana has to somehow convert them to cedis at an exchange — a task which is, as of this writing, likely to be slower, much clumsier, far more user-hostile, and very possibly even more expensive than the usual medium(s) of remittances.”

It makes sense, then, that Facebook’s first push is to service the remittance market in India. According to Bloomberg, WhatsApp has more than 200 million users in India and India has more remittances coming in to families back home than any other country in the world. According to the World Bank, in 2017 remittances back to India totalled $69billion.

Says TechCrunch’s Evans, “If Facebook can bulldoze that obstacle, though – then we’re talking about a big deal.”

Miracle Messages Uses Social Media to Reunite Homeless with their Loved Ones
Millions of Facebook Passwords and Other Passwords Stolen in Massive Breach by Pony Botnet Controlle...
SnapChat Rejects Facebook Offer of $3Billion - True. Rejection Letter - False.
Facebook Patents Inferring Income of Their Users
Woman Using Facebook to Search for Her Long-Lost Father
We Explain Why People are Saying "Tainted Meat" All Over Facebook and Twitter
How to Create a Strong Password
Talking Angela Facebook Message is a Hoax But There are Real Concerns
Share the knowledge

Number of people who have enjoyed this article: 1,424