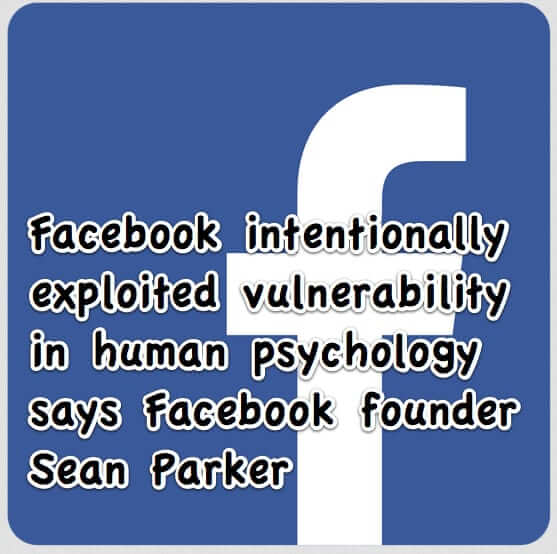 Sean Parker, who joined Facebook as president and an original founder back in 2004, just five months after it was launched as a student directory, stunned many when he stated last week, during an Axios event, that Facebook was intentionally designed to exploit a vulnerability in human psychology. That vulnerability, says Parker, is a “social-validation feedback loop”.


Not unlike rats getting a treat every time they take the correct action.

In an article on the Axios website, Parker’s comments indicate that all of this was very much intentional.

Explains Parker, “The thought process that went into building these applications, Facebook being the first of them, … was all about: ‘How do we consume as much of your time and conscious attention as possible?'”

In fact, he points out that exploiting the social validation feedback loop is “exactly the kind of thing that a hacker like myself would come up with, because you’re exploiting a vulnerability in human psychology,” adding that “The inventors, creators — it’s me, it’s Mark, it’s Kevin Systrom on Instagram, it’s all of these people – understood this consciously. And we did it anyway.”

Parker, who was one of the original founders of Napster prior to joining the infant Facebook, has been described by Mark Zuckerberg in a Forbes article as “pivotal in helping Facebook transform from a college project into a real company.”

It all came about, according to Forbes, when, upon first seeing Facebook in its student directory form, Parker knew that the college market was “ripe for its own social network.” Facebook was already up and running at Harvard, so Parker wrote to Facebook’s email address, and ended up meeting with Mark Zuckerberg.

The rest, as they say, is history. But a history with which Parker seems to now be decidedly uneasy.

“I don’t know if I really understood the consequences of what I was saying,” (back then) says Parker, “because the unintended consequences of a network when it grows to a billion or 2 billion people and … it literally changes your relationship with society, with each other … It probably interferes with productivity in weird ways. God only knows what it’s doing to our children’s brains.”

You can see a video of Parker’s talk in which he makes these remarks here.

How Private are Facebook Private Closed Groups Really? Not Very it Turns Out
Facebook Lets Advertisers Discriminate by Race through Facebook's Racial Profiling
SocialEyes - Video Chat with All Your Facebook Friends - Sort Of
How to Find a List of All of the Facebook Pages You Have Liked
How to Know If You Are Interacting With a Bot
How to Turn Off Facebook Event Reminder Notifications
What You Should Know About WhatsApp's Business App and WhatsApp Business API
Burgler Uses Victim's Computer While in Home: You Won't Believe What He Did Next!
43shares