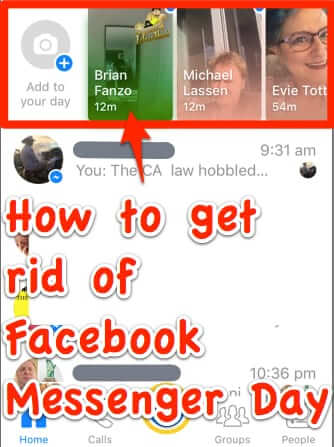 If you are wanting to turn off the new Facebook Messenger Day, you’re not alone. Messenger My Day is Facebook’s answer to SnapChat My Stories; it’s also annoying the heck out of a lot of Facebook Messenger users, with its ‘Add to your day’ in your face at the top of the screen. So, if you don’t want to ‘add to my day’, this is for you. Unfortunately, the answer to how to turn off Messenger Day is ‘you can’t’..BUT, you can get rid of it entirely. Here’s how.

Not only does Facebook Messenger Day take up the top fifth of your Facebook Messenger app window, but Facebook has inexplicably added a camera button at the bottom of the screen, so that when you try to scroll down through messages, you instead invariably launch the camera! Grrrr! No, Facebook, no matter how cute you make it by trying to disguise it as a sun, nothing masks the fact that it’s a royal pain in the neck!

So for those of you who want to get rid of Facebook Messenger Day, here is a step-by-step tutorial.

The below steps are for how to get rid of Messenger Day from an iPhone, but the steps are similar for an Android phone. 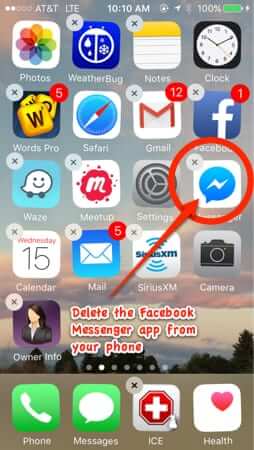 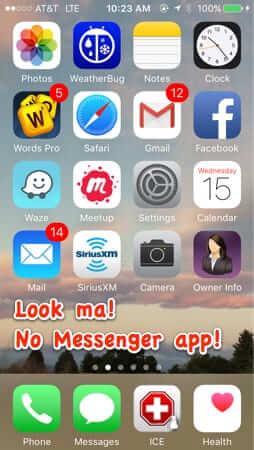 Now, connect your phone to your computer, and launch iTunes.

Sync your phone, and the sync should automatically add Facebook Messenger back to your phone, using the older version.

Now both Messenger Day, and that annoying sun camera button at the bottom, are gone! 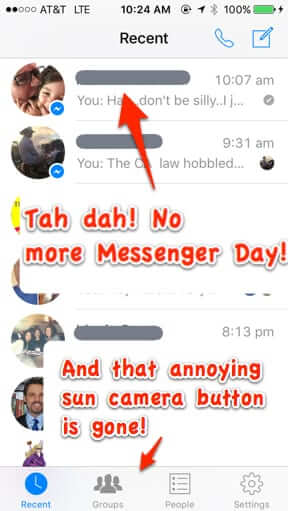 Now, if you are one of the unfortunate souls who updated through iTunes, you can find instructions at the links below to get back a previous version of Facebook Messenger.

If you’re on an iPhone, the steps are pretty complicated, but not impossible. Read this article on how to install older versions of apps on an iPhone.

If you are on an Android phone, it’s a bit easier, and you can go to this archive of older Android versions of Facebook Messenger.

Facebook Privacy Disclaimer Not Worth the Paper It's Written On
New Jersey Police Department in Kerfuffle Over Publishing Mug Shots on Facebook
Facebook Admits Conducting Research Experiments with Users Emotions: Read How
Facebook Paper - Facebook Reinvents the Facebook App Again
Facebook Bug Causing Legitimate Posts to be Marked as Spam
How to Cancel a Rocksbox Subscription
Miracle Messages Uses Social Media to Reunite Homeless with their Loved Ones
How to Find Your Email Files on a Mac or Macbook
Share the knowledge

15 thoughts on “How to Get Rid of Facebook Messenger Day”

Number of people who have enjoyed this article: 1,951