You know that old adage, that something is only as strong as its weakest link? Well, private Facebook groups are only as private as the admins keep them. Which means that all it takes is for one admin to accidentally (or intentionally) make the group public for a period of time, during which people who aren’t members of the closed Facebook group can see both the members, and what they posted. So how safe is it to rely on the private, closed status of a Facebook group? Not very, it turns out.

Public Facebook Groups: Anyone can see anything, including all of your posts.

Closed Facebook Groups: Also sometimes called Private Facebook Groups, anyone can see that you are a member, but only other members can see what you post. 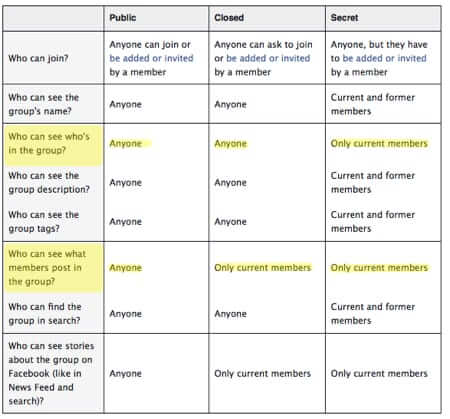 So, now that you have an understanding of what it means for a Facebook group to be public, or closed, just how secure and private is a closed Facebook group?

Is it a place you can share your deepest or darkest secrets, knowing that nobody outside of the group can see them?

Only if your group admins are 100% trustworthy, and infallible.

To demonstrate what we mean, here is an actual example.

This is a notification that Facebook places in your regular notifications area when an admin makes a privacy change to a group to which you belong. This particular group is usually closed, meaning nobody who is not a member of the group can see what group members post:

Now, we want to draw your attention to a couple of things:

This means that it’s possible that you will not know that the group in which you are a member, that you considered private, has actually been made public with a single click by one of the admins.

Now, we can hear some of you saying “Well, yes, but it doesn’t really matter because the notification also said that it was only ‘momentary’.”

Remember when we said that there was no obvious notification? For those who receive all Facebook notifications as email, as well as within Facebook, there actually is a notification that the group was made public – sent by email.

Here are the actual email notifications for our example:

The astute observer will notice that this private group was made public for a full 18 minutes.

Now, is 18 minutes of unexpected public exposure of your posts really a big deal?

And we say yes, any amount of public exposure of posts made in groups where you have been relying on your posts being and staying private and protected, is too much.

Now, all that said, Facebook says that (as of the time of this writing), once a group has 250 or more members the admin can only make it more restricted, not less. So, that may be true today – but it won’t necessarily be true tomorrow. Facebook changes things every day (and in fact openly states that they update some things – such as their apps – every two weeks like clockwork, whether they need it or not).

As we’ve said more than once – if you don’t want someone to see it, don’t put it on the Internet. At all.

New Facebook Anonymous Login Explained
Gmail’s Spam Problem and What You Can Do About It
LG Smart TV Spying on Users
What We Should Learn about Email Privacy from Hillary, Sony, and the Egg Board
Stunning Example of What Cell Phone Records and Publicly Available Data Can Reveal About You
Eavesdropping by Reading Vibrations on a Potato Chip Bag
You May Be Missing Private Messages on Facebook If You Aren't Looking in These Two Places
Facebook to Launch "FaceCoin" Cryptocurrency Bitcoin Competitor
how private is FB Groups, If I share a public message to a private group in Facebook does it stay private?, What is a private group on Facebook?
Share the knowledge

2 thoughts on “How Private are Facebook Private Closed Groups Really? Not Very it Turns Out”

Number of people who have enjoyed this article: 5,777