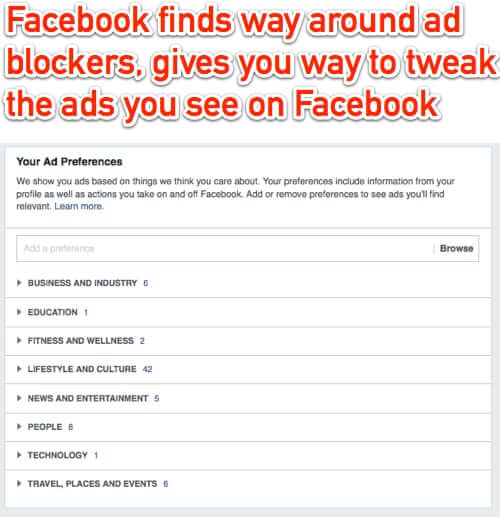 Facebook announced yesterday that in response to a report that Facebook commissioned, which found that 70 million Americans (and almost 200 million people worldwide) use adblockers, Facebook advertising code is now being designed to get around advertising blockers. So far these changes only affect the desktop version (i.e. what you see with your web browser), and not the mobile version of Facebook.

According to Facebook, “we’re announcing some changes to help with this problem… we’re providing an update on our approach to ad blocking on Facebook.” That updated approach is giving their advertisers a way to get their ads past ad blockers, by making ads look even more like regular Facebook updates, instead of, you know, ads.


Facebook goes on to say that “What we’ve heard is that people don’t like to see ads that are irrelevant to them or that disrupt or break their experience. People also want to have control over the kinds of ads they see.” Where they heard this was in the result of a survey of 2000 people worldwide which Facebook commissioned last year. (Those results, promulgated by UK research firm Ipsos MORI, are here.)

This, of course, seems an effort to finesse the actual point: people don’t want to see ads at all on Facebook.

But, of course, we are also resigned to the fact that a) we don’t pay to use Facebook, and b) and much more to the point, the users are the product on Facebook. Facebook makes its millions by charging advertisers for access to you.

According to Techcrunch, the way that Facebook is going to get around adblockers is by “making the HTML of its web ads indistinguishable from organic content so it can slip by adblockers.”

The Techcrunch article has been cited by many others, however we have been unable to independently verify that this is what Facebook is doing.

That said, according to the New York Times, “To shut down the blockers, Facebook is taking aim at the signifiers in digital ads that blockers use to detect whether something is an ad. Facebook’s desktop sitewide changes will then make ad content indistinguishable from non-advertising content. For blockers to get around these changes, Facebook said they would have to begin analyzing the content of the ads themselves, a costly and laborious process.”

Clearly it is something in the coding – or rather something being removed from the coding – in the ads on Facebook, which will render ads harder to distinguish from regular content.

Regardless of how it is going to happen, it is happening.

To address the hand-wringing that they knew would accompany this change, Facebook has also tweaked your Facebook user ad preference options for you.

Says Facebook in their announcement of these changes, “With today’s announcement, we’re building on these efforts by making ad preferences easier to use, so you can stop seeing certain types of ads. If you don’t want to see ads about a certain interest like travel or cats, you can remove the interest from your ad preferences. We also heard that people want to be able to stop seeing ads from businesses or organizations who have added them to their customer lists, and so we are adding tools that allow people to do this. These improvements are designed to give people even more control over how their data informs the ads they see.”

To exercise this ‘control’ (it will basically allow you let Facebook know that, if you have to see ads, you’d rather see them about certain industries, companies, etc.), go to your Facebook ad preferences settings, where you will see this menu: 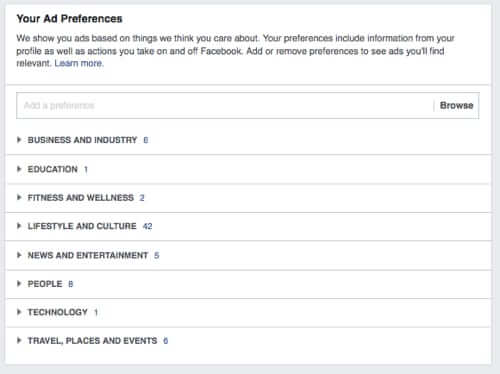 When you click on one of the categories, you’ll see a dropdown of all of the various advertising sub-categories, company names, etc., which Facebook has helpfully assigned to you, based on actions which you have taken on Facebook, and from which you can opt out. 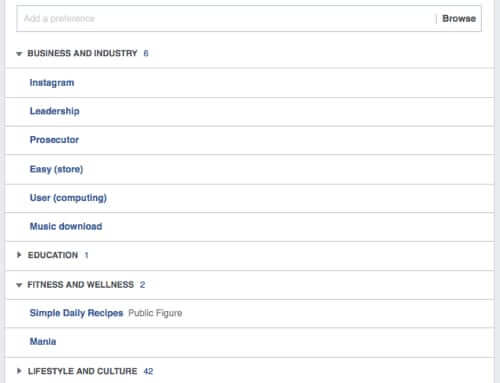 Hover over a given line, and it will show you both the “i” for information, and an “x” to remove that ‘preference’.

Of course, removing the preference isn’t going to reduce the number of ads that you see on Facebook. 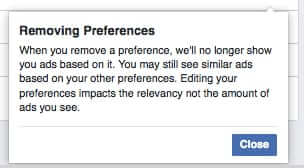 To save your new preferences, simply navigate away from that page, and they will be saved.

Keep in mind, again, that removing categories, companies, etc., from your ad preferences on Facebook will not reduce the number of ads that you will see on Facebook. It will just reduce (or not) their relevance.

WhatsApp Users Leaving for WhatsApp Alternatives in Droves Following Facebook Acquisition
7 People You Will Be Surprised to Be Able to Follow on Facebook
Facebook's Graph Search Turns Facebook into Best Dating Site on the Internet
Facebook to Start Identifying Hoaxes for You in Your News Feed
Facebook Acquires Virtual Reality Technology Oculus VR
Woman Using Facebook to Search for Her Long-Lost Father
Internet Deception: Why It's So Easy and How to Detect It
Facebook is Analyzing All of Your Images and Taking Note of the Contents
10shares

One thought on “Facebook Learns People Use Adblockers, Changes Code to Avoid Adblockers”