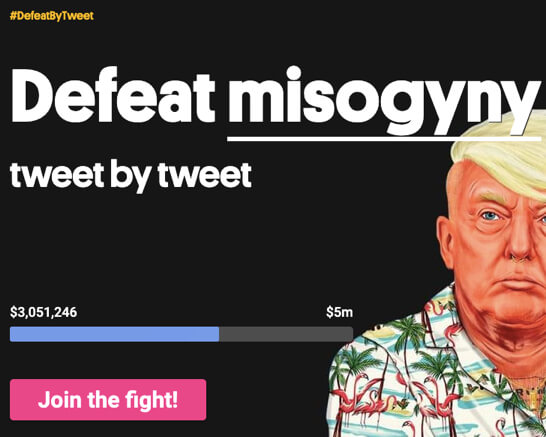 First, just what is Defeat by Tweet (which also is referred to sometimes as DBT)? Defeat by Tweet is a service that donates money to grassroots organizations working to make sure that President Trump does not get re-elected, especially in nine key swing states.

The money that they donate to these organizations comes from individuals donating to Defeat by Tweet, and it works like this: people pledge a “per tweet” dollar amount, and every time President Trump tweets, that pledged amount is debited from your credit or debit card, and then passed along to the grassroots organizations that DBT is supporting.

Says Defeat by Tweet, “1. You set a donation amount per tweet; 2. Trump tweets (because of course he does); 3.Your money is sent to grassroots organizations in swing states; 4. Trump loses. Humanity wins.”

Say you pledge 10 cents per tweet, and President Trump makes 83 tweets in the funding period. Defeat by Tweet would debit your card $8.30, and pass that along to the organizations that they support.

Defeat by Tweet is built on the Momentum platform. They are both the brainchild of Xander Schultz, a graduate of the University of San Francisco, founder of several organizations and startups, and founder and host of the What We Don’t Know podcast.

Momentum is a platform and app that allows you to donate to your favorite charities based on small daily actions that you or someone else takes. For example, whenever the president tweets. You can donate to any organization that is officially recognized as a 501(c)3 charity, or to a ‘collection’ of charities (much like the collection of grassroots charities being fed by Defeat by Tweet), for example Momentum’s animal welfare collection, which distributes donor funding to Animal Equality International, The Humane League, the Albert Schweitzer Foundation, the Good Food Institute, Compassion in World Farming, the Humane Society, and Mercy for Animals.

You do this by setting up a “rule” in your Momentum account, for example “Whenever I buy coffee at Starbucks send $1 to my chosen charity.” How Momentum knows to debit your card is based on your connecting your credit or debit card to your Momentum account, and then, says Momentum, “We’ll track purchases from the cards you set up.” Then, unless and until you cancel that rule, every time you buy a coffee at Starbucks, $1 will be earmarked out of your account to send to your charity.

So, basically, the wizard behind the curtain of Defeat by Tweet is Momentum. Put another way, Defeat by Tweet is really just another one of the pre-curated charities you can donate to through Momentum, with the action that triggers your donation being the occasion of a tweet by the president.

Which means that if you need to suspend or cancel your Defeat by Tweet donations, you have to do it through your Momentum account, which you may not realize you even had, let alone what the password is.

[Note: This was true as of the writing of this article, however we see now that they have updated that, but we’ll still leave the article up for the other info in it.]

Now, if you fully grokked that Momentum was behind Defeat by Tweet when you signed up, and if you happen to have installed the Momentum app (available in your app store), then you are way ahead of the game, because you can simply cancel rules from within the app.

Likewise, you can change your Momentum password from within the app, and you can do a password reset from the app’s login screen.

But what if you signed up through the web, and don’t have the app? Or, what if you have the app, but the forgot password link isn’t working? And now you want to cancel your Defeat by Tweet payments, but you have to go to Momentum to do it, and you never set up a Momentum password, or it’s not working or you forgot it?

Fortunately, there is a way to reset your password at Momentum, and that is by going here.

How to Reduce the Amount of Time You Spend on Your Cell Phone
How to Invite People from Outside Your Country to Clubhouse App
Snapchat Partners with Square to Offer Snapcash Mobile Payment
Pizza Rat an Internet Sensation
Reposting Images on Social Media? How it Can Get You in Trouble
More Than Half of Americans Check Email in Bed
How to Find the Online Census, Telemedicine Online Virtual Doctors, Online Tax Filing, and Tax Filin...
Online Therapy Catching On with Online Therapists, Counselors, and Free Listeners
defeatbytweet cancel
Share the knowledge

Number of people who have enjoyed this article: 865