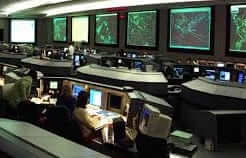 Social media command centers, staffed with social media first responders known as “social care representatives” are being implemented by companies who grasp what many brands fail to recognize: that social media is a real-time customer service voice that can be used for social media successes, or ignored and turned into public social media disasters. Airlines, in particular, are jumping on board.

Airline social media command centers are fully staffed with air travel social care representatives for the traveler experiencing the inconveniences commonly faced by travelers, such as lost luggage or delayed flights. Airlines are realizing that a tweet or a Facebook post is the new way that weary, frustrated travelers are lodging their complaints, and that they need to do something about it.

In an interview with NPR, Southwest Airline’s Ashley Petit explained that they’re seeing over 3,000 Southwest mentions across the social channels every day. Southwest has nine social media responders furiously tapping away at their keyboards at any given moment. To stay even more on top of trends, they have eight large flat-screens showing news and trending topics as well as any photos and videos in which Southwest has been tagged.

Pettit shares an example of a man calling in to register a complaint only to find out, says Pettit, that “His 15-year-old son had already tweeted at us, and we had already filed a complaint, issued compensation, taken care of the whole thing. It was just in the process of being approved, and they were about to get the e-mails with the vouchers. And so that was kind of a fun interception that, you know, we’re already on top of it.”

The purpose for such a proactive approach is for Southwest to be anticipatory rather than reactionary, giving them all of the information they need as quickly as possible, and many airlines are realizing that social media is far more cost effective than manning traditional customer support phone lines.

And while Southwest’s 9-person social media command center team may sound impressive, other major international airlines, such as KLM, have over 100 people on their social media team, manning social media support stations, many requiring complaints to be resolved within an hour.

Despite all of this, don’t think that just because you’re a paying customer you hold as much clout as all of the other travelers. Through social listening, airlines do identify which of their customers are major influencers, or customers with a high net worth. So you may have a legitimate flight issue, but you may not be helped as quickly as the millionaire on the same flight as you.

But don’t let that upset you too much, for most of these airlines, their social media command centers are there to right wrongs as quickly as possible, because, ultimately, airlines know that poor social media responses negatively impact their brand, and they want to spend as little time as possible publicly apologizing for a wrong, vs. being praised for a win.