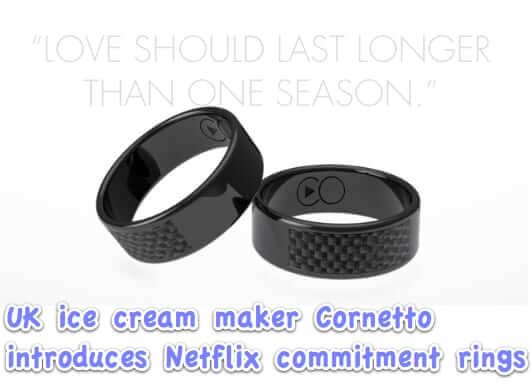 Apparently some folks in the UK have bigger problems than breaking up with the EU on their minds. UK ice cream maker Cornetto has come up with Netflix “commitment rings”, to keep partners from binge watching their favourite shows unless they are together, so that one can’t commit Netflix adultery on the other. Yes, really. Because, says Cornetto, “Love should last longer than one season.”

Explains Cornetto, “Cornetto, the ice cream that has united couples for decades, created a gadget to prevent the most common reason why couples fight nowadays: watching episodes ahead of your partner. Two rings with NFC technology linked to a video streaming platform that can only be activated when the rings are together.”

Love should last longer than one season

“The Commitment Rings have NFC technology and are linked to a video streaming service account for six months. With it’s mobile app, couples can pick the series they want to watch together. So, when the rings are close to each other, the app detects them and automatically unblocks those series.”

Here’s how it works: You download the app to one of your phones. You put the shows that you want to be able to watch only when the two of you are together (not one without the other) into the app. Then, in order for your streaming service to display and play the show, both of your rings have to be within range of the phone.

It’s sort of like needing the two keys to hit the big red button.

How the Netflix Purity Commitment Rings from Cornetto work: 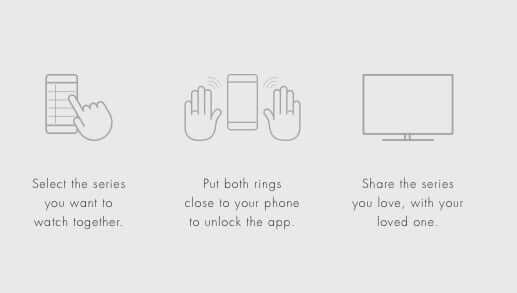 In other words, it actually takes two rings to rule them all.

Of course, these aren’t available everywhere yet, or, indeed, at all. But Cornetto is working on making this a reality for those who want them. Says Cornetto, “Cornetto is partnering with some of the top streaming services to make the Commitment Rings available to everyone.”

You can sign up to be notified of when they are available in your area at the Netflix Commitment Ring website.

4 Useful Google Chrome Features You Probably Didn't Know Existed
Getting Calendar Invitation Spam on Your Apple Device? Here's How to Stop It
Why is Adobe Flash Player Being Discontinued? We Explain
Ford Life360 App Drive Mode Discourages Texting While Vehicle in Motion
5 Rising Social Media Platforms to Watch-If You Are Business Minded
Top Web Browsers for Android in 2020
Apple Google Contact Tracing a Reality with Release of Coronavirus Tracking App Interface
How to Tip with the Starbucks App
Spread the love