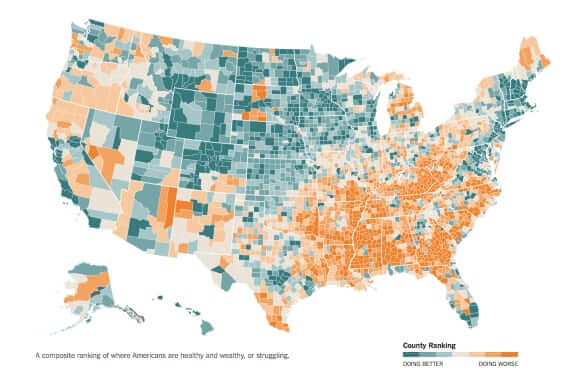 The New York Times recently did a comparison of Google searches originating in areas where, according to the NYT, people have life the easiest to areas where life is the hardest. Here’s what they found.

First, what metrics did the Times use to determine whether residents of a particular area generally had an easy life or a hard life?

Well, the New York Times predicated their analysis of Google searches in easy or hard areas on their own previous determination of ease versus difficulty of living, on a county-by-county basis.

[For an explanation of how Google, the New York Times, and others track a user’s geographic location, see our article How’d They Know Where I’m Located? Geolocation by IP Address. For an earlier example of Google putting this sort of tracking to public use, see our article Track Where in the U.S. the Flu Outbreaks are with Google Flu Trends.]

According to the Times, they determined where are the hardest and easiest places to live “by looking at six data points for each county in the United States: education (percentage of residents with at least a bachelor’s degree), median household income, unemployment rate, disability rate, life expectancy and obesity. We then averaged each county’s relative rank in these categories to create an overall ranking.”

According to David Leonhardt, the columnist involved in the Google search analysis, after the hardest and easiest places to live piece was published, “we heard from Hal Varian, the chief economist at Google, who suggested looking at how web searches differ on either end of our index.”

In his own article, entitled In One America, Guns and Diet. In the Other, Cameras and ‘Zoolander’: Inequality and Web Search Trends (but that could as easily, and more forthrightly, be called What rich people and poor people are searching for on Google), Leonhardt says that “The results, based on a decade of search data, offer a portrait of the very different subjects that occupy the thoughts of richer America and poorer America. They’re a glimpse into the id of our national inequality.”

(Nice to know that Google shared ten years of search data with the New York Times. One can only imagine with whom else they are sharing it.)

So, just what are people who ‘have it good’, as compared to those who don’t, searching for on Google?

It’s important to bear in mind, also, that Leonhardt scrubbed out searches that ranked highly in both types of areas. In other words, while the terms “Oprah Winfrey” and “Super Bowl” figured highly in searches in both easy and hard places, those terms were completely ignored (because, well, they figured highly in both places). So by definition, what falls out is the terms that are different, and figure more prominently in one place or the other. Put another way, this article intentionally highlights differences, and ignores commonalities. 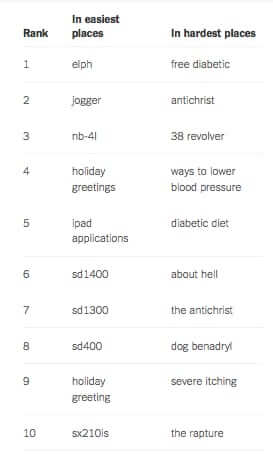 Leonhardt’s article comes to some interesting – and some would say dubious – conclusions; conclusions which may or may not be supported by the evidence which is, let’s face it, the top Google searches from each region that the NYT has itself adjudged as ‘easy’ or ‘hard’ to live in, removing the searches in common, and making some pretty broad assumptions on the rest.

Read the original article for yourself, and then come back here and let us know what you think.

Read the New York Times article about what rich people and poor people are searching for on Google.

Match iPhone Parental Control Features With Your Parenting Style
Can Your Car be Hacked through its Onboard Wireless?
Is it Really Possible to Manage Your Online Reputation?
The Mueller Report Online - Full Text of the Mueller Report Including Conclusions
Here's What ACH Credit SBAD TREAS 310 - MISC PAY NTE PMT EIDG or EIDL Means
Google Ordered to Disclose Everybody who Searched for a Particular Person in Edina, Minnesota
What is the Florida Man Challenge and How Did the Florida Man Challenge Get Started?
How to Google Like a (Internet) Gangsta
Share the knowledge

Number of people who have enjoyed this article: 1,986