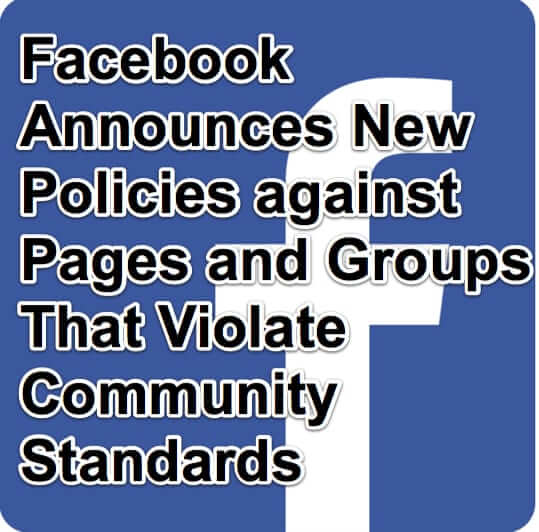 Unless you’ve been living under a rock (and perhaps even then) you’re probably aware that Facebook has a problem with fake news pages, fake accounts running subversive groups, and all other manner of bad intentioned accounts and content. Today Facebook announced new policies regarding the removal of content deemed to go against community standards from Facebook Pages and in Facebook Groups, as well as measures to crack down on preventing those who have had their content removed from simply reinventing themselves in a different page or group.

According to Facebook’s Statement on Making Pages More Transparent and Accountable, the two main changes are that they will be showing page admins when content from their page is removed for a policy violation, and how they deal with “recidivism”. Such policy violations will include hate speech, graphic violence, harassment and bullying, nudity or sexual activity*, and, and we quote, “support or praise of people and events that are not allowed to be on Facebook.”

We were particularly curious about that “praise of people” language, as that seems particularly thought-policey (well, ok, speech-policey) to us, so we went digging to see what we could find.

Here’s what Facebook says about that: “We do not allow content that praises any of the above organizations or individuals or any acts committed by them.”

*While Facebook touts their Community Standards, including against “Adult Nudity and Sexual Activity” and “Sexual Solicitation” on their Facebook Community Standards page, it was not that long ago that we received a blatant ad (and probably a scam) offering sex, reported it to Facebook, and was told that it did not violate their community standards. So, make of that what you will. You can see the ad and read all about it here: Facebook Allowing Profiles that are Overt Sex Ads – “Not Against Community Standards” says Facebook.

But we digress – anyways, the big deal about Facebook’s announcement today is what they are calling their “Recidivism Policy”.

Now, typically the term ‘recidivism’ is applied to criminal offenders who, after serving their time, relapse into criminal behaviour.

In Facebook’s use of the term, they mean people or organizations who, once having had a Facebook Page or Facebook Group removed for a policy violation, repurpose another page or group that they admin to start pushing material for the same violative purpose.

To combat this, Facebook will now preemptively remove other pages and groups “even if that specific Page or Group has not met the threshold to be unpublished on its own”, basing the decision on “a broad set of information, including whether the Page has the same people administering it, or has a similar name, to one we’re removing.”

In case you’d like to read it, here is Facebook’s full statement on the changes, which you can also read here.

We’d really like to know your thoughts on all of this, so please tell us what you think of this in a comment below.

Second, we are updating our recidivism policy to better prevent those who have had Pages removed for violating our Community Standards from using duplicate Pages to continue the same activity. We’ll begin enforcing this policy in the weeks ahead.

The new Page Quality tab is designed to help people who manage Pages understand how well their Pages comply with our guidelines. The tab includes two sections:

1. Content we recently removed for violating a subset of our Community Standards and;
2. Content recently rated “False,” “Mixture” or “False Headline” by third-party fact-checkers.

We’ll be providing more information in the Page Quality tab over time. To start, we’re including content removed for policies like hate speech, graphic violence, harassment and bullying, and regulated goods, nudity or sexual activity, and support or praise of people and events that are not allowed to be on Facebook. While this tab provides greater insight into content that was removed or demoted, it is not a comprehensive accounting of all policy violations. For example, we won’t be showing content removals at this time for things like spam, clickbait, or IP violations.

We hope this will give people the information they need to police bad behavior from fellow Page managers, better understand our Community Standards, and, let us know if we’ve made an incorrect decision on content they posted.

To address this gap, when we remove a Page or group for violating our policies, we may now also remove other Pages and Groups even if that specific Page or Group has not met the threshold to be unpublished on its own. To enforce this updated policy, we’ll look at a broad set of information, including whether the Page has the same people administering it, or has a similar name, to one we’re removing.

Research Says that Instagram Leads Teen Girls to Feel Bad about Their Bodies and that Facebook Knows...
Paternity Notice on Facebook not Enough for Termination of Parental Rights, Rules Court
What Does #hmu4atbh Mean? We Explain
Facebook Sued by Attorney General over Cambridge Analytica Debacle
Calls for Users to Leave Facebook Amid News that Facebook Quizzes Facilitated Cambridge Analytica Fa...
How to Get Back the 'Most Recent' Stories View on Your Facebook Newsfeed Timeline
Apartment Complex Tries to Force Tenants to Like Them on Facebook
Man Livestreams Son's Birth on Facebook
Share the knowledge

Number of people who have enjoyed this article: 1,141