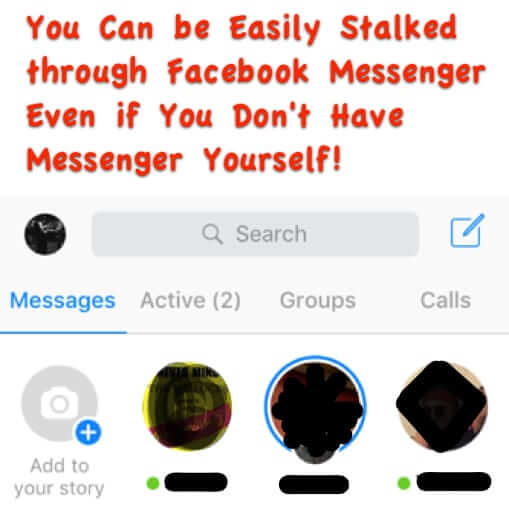 One of the things that Facebook did right was not allowing people to see whether you are logged into Facebook. Unfortunately, they completely undid that when they rolled out Facebook Messenger, and the newest versions of Facebook Messenger turn out to be a stalker’s dream.

This is because the Facebook Messenger app reveals when any Facebook friends are currently online. Even if they themselves don’t have the Messenger app.


This means that all anybody who is connected to you as a friend on Facebook has to do to track when you are online on Facebook is install the Facebook Messenger app, even if they never otherwise use it.

First, there are the profile icons across the top of the Facebook Messenger home page. Here Facebook displays a green dot next to the name, under the avatar icon, of any friends who are currently active on Facebook. 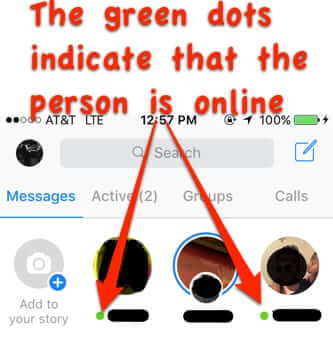 And that’s not all! They not only give up that you are online, but they even share how long you have been idle! 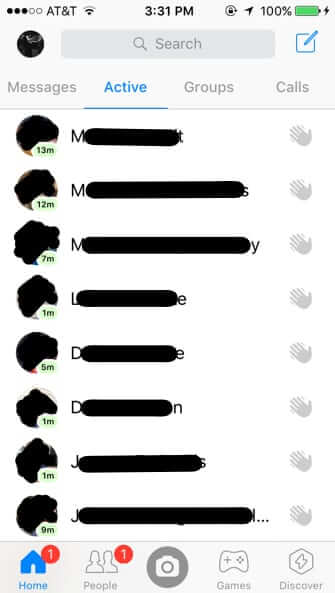 And not only that but, as we mentioned above, people can see this even if you don’t have Facebook Messenger at all.

Here we can see that our friend – let’s call him ‘John’ – has been active on Facebook within the past minute. 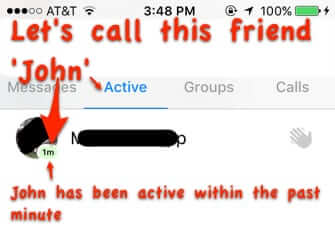 When we click on John within Facebook Messenger, not only can we message him, but we are exhorted to “invite John to Messenger.” 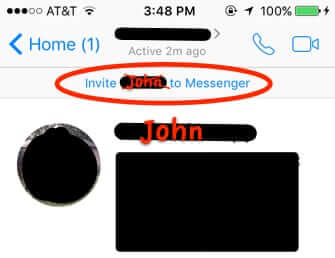 So, what can you do about this?

Of course, this means that in order for nobody to be able to status stalk you like this, you would have to block everybody, at which point, what is the point of being on Facebook?

Something that we are all beginning to ponder more seriously.

People also searched for can a cyber stalker record your facebook videos through facebook messenger, can you be stalked on messenger?

Stunning Example of What Cell Phone Records and Publicly Available Data Can Reveal About You
How to Stop Facebook from Posting Your Location (2016)
Free Email Privacy and Security Tester
Is It Possible to Delete Yourself From The Internet?
Facebook Tagging of Photos and Facebook Facial Recognition: How it Works and How to Opt Out of Tagg...
How the Heck did Square Get My Email Address?
Is Facebook Aiming to Become a Cryptobank with Facebook's Cryptocurrency Libra and Cryptowallet Cali...
Transcript of Interview Given by PRISM Whistleblower Edward Snowden
15shares

How to Delete iPhone Apps Permanently from Your Computer 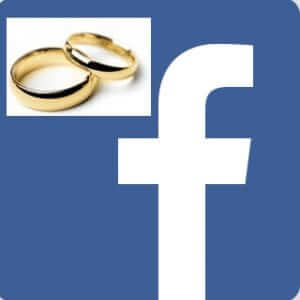