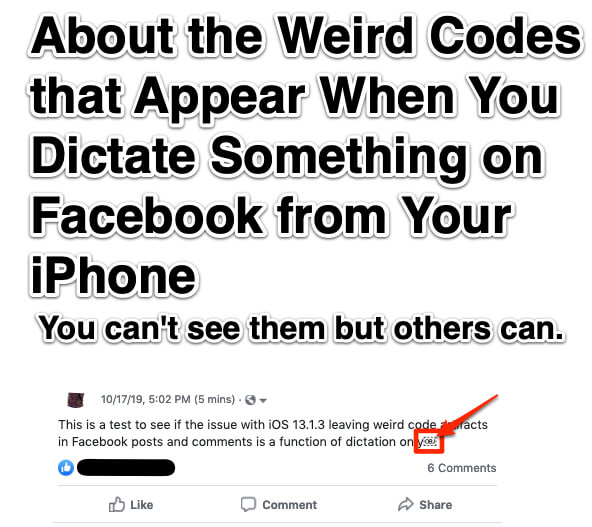 In the past few weeks some people who have upgraded to iOS 13.1.2 have noticed that when they post something to Facebook which was dictated on their iPhone, these weird little codes or artifacts show up at the beginning or end, or even in the middle, of their comment or Facebook post. We believe we have figured out what’s going on with these objects, and also what to do about it.

It’s no coincidence that we refer to these odd elements as objects, because we believe that what they are is, in fact, artifacts of an object which is invoked when you dictate something on your iPhone that is then posted to Facebook.

Now, we are not programmers, so this is just a guess, but we believe it to be a pretty good guess, particularly as that symbol, or whatever you want to call it, that is mixed in among your text on Facebook is, in fact, a box with the lettering OBJ, for object.

What’s more, we have determined that:

1. The box with the OBJ in it only shows up on Facebook in posts or comments that have been dictated from an iPhone, and

3. The box is visible to readers of the post or comment if those readers are using a browser, or are on an Android device, and

4. The box with the OBJ in it is not visible to iPhone users using the Facebook app, so that user may have no idea that others are seeing that weird code in the user’s Facebook posts and comments.

As a result, we believe that these foreign objects embedded within the text of Facebook posts and comments, dictated on iPhones running iOS 13.1.2, are an issue between the Apple SFSpeechRecognizer object, and Facebook. What exactly is the issue, we cannot say, but we believe this is likely what is causing the issue.

What to Do About It

We also believe, although based on limited data, that the forthcoming iOS update, 13.1.3, will fix the issue, even though it is is not mentioned in the ‘About this Update’ section. 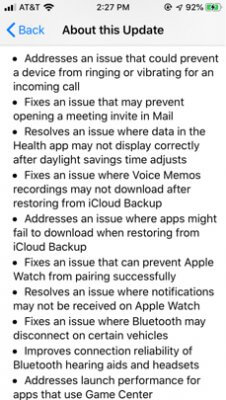 People also searched for what does obj mean on facebook, unchain emails gmail, obj on facebook post, ios dictation unicode obj, on a Craigslist post what does OBJ in a dotted box mean, why do some messages end with obj

SnapChat Rejects Facebook Offer of $3Billion - True. Rejection Letter - False.
What Does #hmu4atbh Mean? We Explain
Does Private or Incognito Mode Make Browsing Anonymous?
Facebook Tagging of Photos and Facebook Facial Recognition: How it Works and How to Opt Out of Tagg...
New Facebook Patent Lets Lenders Determine Whether to Give you a Loan based on Your Facebook Friends
Internet Deception: Why It's So Easy and How to Detect It
Facebook App Scans Sex Registry for Your Facebook Friends
Facebook Shuts Down All Facebook Hosted Email and Email Forwarding
Share the knowledge