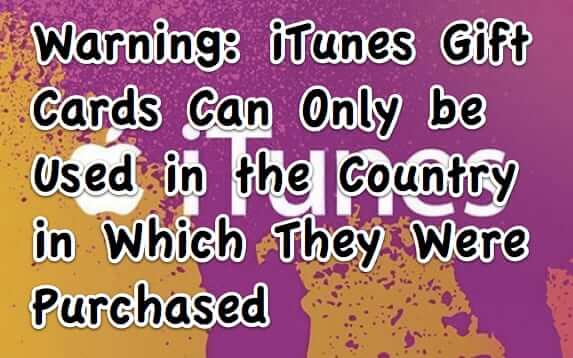 If you purchase an iTunes gift card in one country, can it be used in a different country? We recently had email from a reader explaining that she has a friend working in the UK, and that he told her that the iTunes card he purchased in the UK will not work to purchase Apple music on his U.S. phone. So, can you use an iTunes gift card purchased in one country in another country? The answer may surprise you.

And yes, to be very clear, this means that if you purchase an iTunes gift in one country, and send it as a gift to someone in another country, they will not be able to use it.

In fact, here it is, straight from Apple’s mouth:

When redeeming Apple Music Gift Cards, make sure to redeem the cards in the iTunes Store for the same country or region. You can’t change your country or region while you have an active membership.

Gift Cards are valid for use only in the country in which they were purchased. Only residents of the U.S may redeem gift cards purchased in the U.S.

To redeem iTunes Gift Cards, go to the iTunes Store and in the “Quick Links” section in the right column, select “Redeem.”

As to why there is this restriction, Apple doesn’t say, however because it is specific to iTunes (i.e., predominantly, music) our money is on it having to do with the tracking of royalties paid in a given country, and monies spent on royalty-producing media.

People also searched for do itunes cards work in foreign countries, gift cards can only be used in the country where they were purchased

Email Invoice Seemingly from Apple is Scam
How to Block Someone on Your iPhone and Do They Know When You Block Them?
New iWorm Worm Specifically Targets OS X - How to Know if Your Mac is Infected
How to Fix the Mac OS X Java Runtime Environment JRE Error
Full Text of iOS 9 User Agreement - Part 2
How Taylor Swift Brought Apple to Their Knees
How to Capture and Record Streaming Video on Your Mac
How to Easily Draw and Write on Pictures You are Sending in Email with Your Mac
Spread the love