The only way that you could have missed the “1 trick of a tiny belly” or “One tip to a tiny belly” ads that have been everywhere – absolutely everywhere – on the Internet would be if you hadn’t been on the Internet yourself. Well it turns out that those “1 tip” ads, some of which tout “Cut down a bit of your belly everyday by following this 1 weird old tip”, are part of a massive network of scams which the Federal Trade Commission (FTC) has uncovered.

Because these ads have appeared on some very well-known and trusted sites, including Facebook and the Washington Post, made all the worse by the their being linked to bogus news reports of how well the product supposedly works, many many people have fallen for them. The fake articles are hosted on sites with names such as ConsumerOnlineTips.com and WeeklyHealthNews.com. 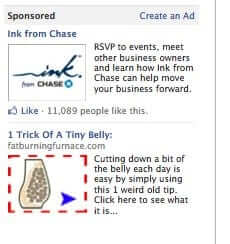 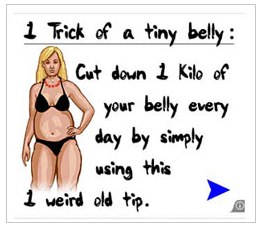 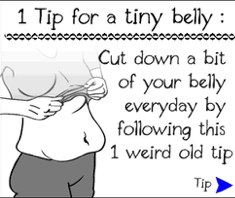 Many of the ads look exactly the same and that’s because, says David O’Toole, an attorney with the FTC, “because it’s cheap. They don’t have to create a new ad from whole cloth. It’s easy to use it again and again because it keeps costs down. And it works.”

And that last part is the most important part: it works – in fact it works even when all a customer orders is the free sample – and that’s because even the free sample ends up costing hundreds of dollars. Customers who order the free samples overlook the teeny tiny print that says that their credit card (which they have to give for “shipping and handling”) will be billed $79 a few weeks later, and $79 again a few weeks after that, and so on, until they call to cancel it – that is, call a number that often doesn’t work.

But make no mistake – the one trick of the tiny belly ads is that the only thing that is going to lose weight is your wallet.

How to Get Yourself Into Trouble with the Camera on Your Phone
About the Amazon Gift Card in Your Mailbox Scam
No, the SpiderMan 3 Trailer Did NOT Break the Web or the Internet
All About the California Consumer Privacy Act of 2018 - California's Own Version of GDPR: An Overvie...
Hate Being Added to Email Mailing Lists without Your Permission? Now is Your Chance to Let the FTC K...
Hater Intentionally Causes Seizure in Epileptic Reporter with "Weaponized Tweet"; Faces Federal Char...
The Truth Behind New York's Ban on Tiger Selfies
Amazon Boots Vendor Based on Fake Take Down Notice from Fake Law Firm
Share the knowledge

4 thoughts on “The Trick of the “1 Trick of a Tiny Belly” Ads is that They are Part of a Massive Scam, say Feds”