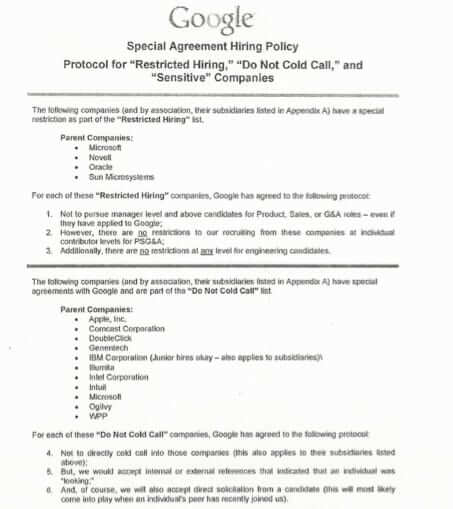 Employees of more than a dozen high tech giants were subject to a secret agreement (see the smoking gun documents) between the companies to not poach each other’s employees. The deal, labelled “Techtopus” by journalist Mark Ames, included Apple, Google, Intel, Adobe, Dell, IBM, eBay, Microsoft, Comcast, Clearchannel, Dreamworks and Pixar, and British public relations company WPP (which stands for Wire and Plastics Products – they started out as a manufacturer of shopping baskets).

It is estimated that the combined workforces of the companies total over one million employees, which, by agreeing to not recruit employees from each other, artifically supressed the salaries of their employees.

Now a class-action lawsuit on behalf of the employees has been allowed to move forward, with an initial trial date set for May.

[NOTE: March 26, 2014 is the last day to submit a claim, or to exclude yourself from the class (should you wish to sue these companies on your own). So, if you were an employee of any of the named companies between 2005 and 2009, you may be part of the class. See link at the end of this article for more information.]

It all seems to have started when Steve Jobs emailed Sergey Brin of Google, in February of 2005. Google was trying to poach employees from Apple, and Jobs warned that Google had better cease and desist, saying that “if you hire a single one of these people, that means war.”

The following week, the VP of HR at Apple sent the following email memo to Apple recruiters:

Please add Google to your “hands-off” list. We recently agreed not to recruit from one another so if you hear of any recruiting they are doing against us, please be sure to let me know.

Please also be sure to honor our side of the deal.

Jobs then turned his sights on Adobe, and in response to his griping to Adobe CEO Bruce Chizen that Adobe was recruiting Apple employees, Chizen responded “I thought we agreed not to recruit any senior level employees…. I would propose we keep it that way. Open to discuss. It would be good to agree.”

And agree they did, after a rather heated exchange, which had Jobs telling Chizen “OK, I’ll tell our recruiters they are free to approach any Adobe employee who is not a Sr. Director or VP. Am I understanding your position correctly?” to which Chizen replied “I’d rather agree NOT to actively solicit any employee from either company…..If you are in agreement, I will let my folks know.”

And let the Adobe folks know, he did, saying internally that “if I tell Steve it’s open season (other than senior managers), he will deliberately poach Adobe just to prove a point. Knowing Steve, he will go after some of our top Mac talent and he will do it in a way in which they will be enticed to come (extraordinary packages and Steve wooing).”

Steve Jobs, a/k/a the Bully of the Valley, didn’t stop there, and within two years Intel, Intuit, and Pixar were part of the “non poach” agreement.

In the meantime, in September of 2005, a ‘friendly’ phone call took place between Google’s Eric Schmidt, and Meg Whitman, who at the time was CEO of eBay, which Schmidt then memorialized in the following email:

DO NOT FORWARD {TIP Editor’s Note: Oops, how’d that work out?}

Meg called to talk about our hiring practices. Here is what she said:

1. Google is the talk of the valley because we are driving up salaries across the board. People are just waiting for us to fall and get back at us for our “unfair” practices now.

2. Our recruiting practices are “zero sum” and it appears that somewhere in Google we are targeting EBay to “hurt them” and its the reputation that we are doing this against Yahoo, EBay and MSFT (I denied this.)

This was a rough call from a good friend. We need to get this fixed.

Complicating things even further was the very incestuous nature of various senior level executives from one company serving on the boards of directors of other companies. For example, at one time Eric Schmidt served on Apple’s board. Bill Campbell, chair of Intuit, both served on Apple’s board, and advised Google.

In November of 2006, Google circulated the following internal memo:

The following companies (and by association, their subsidiaries listed in Appendix A) have a special restriction as part of the “Restricted Hiring” list.

For each of these “Restricted Hiring” companies, Google has agreed to the following protocol:

The following companies (and by association, their subsidiaries listed in Appendix A) have special agreements with Google and are part of the “Do Not Cold Call” list.

For each of these “Do Not Cold Call” companies. Google has agreed to the following protocol:
4. Not to directly cold call into those companies (this also applies to their subsidiaries listed above);
5. But, we would accept internal or external references that indicated that an individual was “looking;”
6. And, of course, we will also accept direct solicitation from a candidate (this will most likely come into play when an individual’s peer has recently joined us).

And this is how things continued for several years, until the fall of 2010, when the Department of Justice (DOJ) announced that Justice Department Requires Six High Tech Companies to Stop Entering into Anticompetitive Employee Solicitation Agreements.

Following the DOJ action, nearly a year to the day later, on September 2, 2011, a suit was filed, “IN RE: HIGH-TECH EMPLOYEE ANTITRUST LITIGATION, 11-CV-02509-LHK, with a request that the court certify the class (meaning let it move forward as a class action lawsuit). 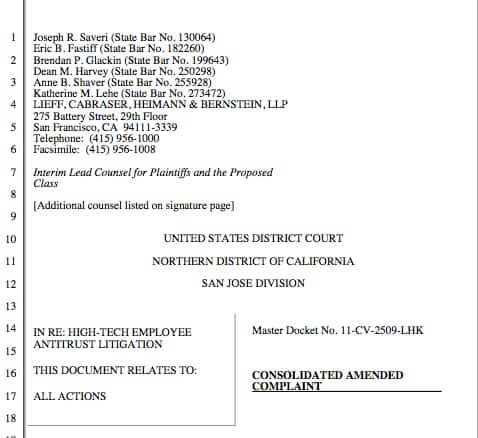 March 26, 2014 is the last day to submit a claim, or to exclude yourself from the class (should you wish to sue these companies on your own). So, if you were an employee of any of the named companies between 2005 and 2009, you may be part of the class.

For information about joining the class, go to the High Tech Employee Lawsuit information site.

Number of people who have enjoyed this article: 2,764